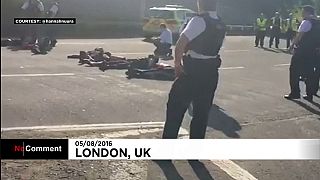 Turbulence as protesters block off airport

Ten people were arrested after protesters from the British arm of the ‘Black Lives Matter’ movement blocked the main road to London’s Heathrow Airport, police said.

Some of the demonstrators locked themselves together across the five-lane road leading to Europe’s busiest airport hub.

‘Black Lives Matter’ started in the United States as a reaction to fatal shootings of black people by white US police officers.