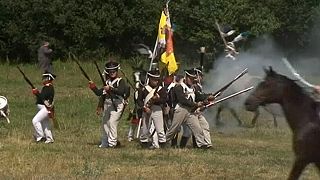 The sound of shooting cannons and pistols and clouds of smoke filled a park in Minsk during a re-enactment of a Napoleonic battle.
​
The goal of the festival is to bring to life the era of the Napoleonic wars, which were fought between 1803 and 1815, pitting the French empire against a raft of European powers, including Russia.

Organisers did not reconstruct a specific battle. They instead tried to represent the whole of 1812 from the point of Belarusians’ involvement in the war.