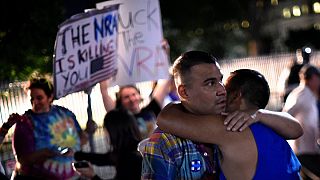 Updated: 13/06/2016
<p>A vigil was held outside the White House to pay tribute to the 50 people killed when a gunman went on a shooting spree at a gay nightclub in Florida.</p> <p>To the backdrop of rainbow flags and banners criticising the National Rifle Association, they sang ‘Star Spangled Banner’ and ‘We Shall Overcome’ to honour the victims of the nightclub attack.</p>
no comment