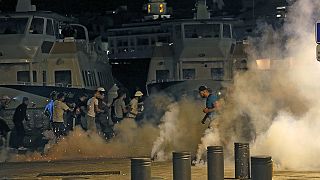 Updated: 12/06/2016
<p>There were tense scenes on the streets of Marseille in the early hours of Sunday morning as police tried to disperse crowds of football fans and locals.<br /> Violence began on Saturday night as England and Russia fans met in the small streets of the Old Port district throwing bottles and chairs and clashing with riot police.<br /> The chaotic scenes were the latest chapter in a three-day story of mayhem and violence surrounding the match, with sporadic fighting flaring repeatedly between rival fans, locals and riot police.</p>
no comment