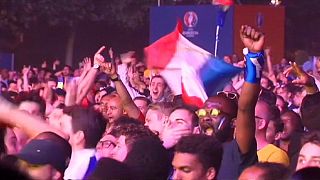 Updated: 11/06/2016
<p>French football fans celebrated on Friday night as their country notched up a 2-1 victory over Romania in the first game of the <span class="caps">UEFA</span> Euro 2016 championship at the Stade de France stadium in Paris. Thousands gathered to watch the game on outdoor television screens.</p>
no comment