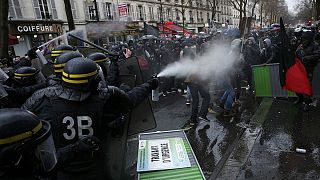 Clashes in Paris over labour reforms

Students and workers held street protests, some of them violent, across France on Thursday while train drivers, teachers and others went on strike to reject a government reform relaxing the 35-hour workweek and other labour rules. A few dozen protesters who were mostly hooded or wearing masks broke off from a peaceful student demonstration in eastern Paris to hurl paint bombs at banks and stores. Some smashed cash machines with bats or set off smoke canisters while confronting the police.