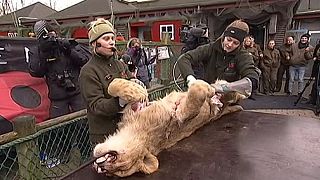 Note to viewers: the video shows detailed shots of the dissection

The animal was put down last February along with two of its sisters by Odense zoo because they had too many big cats and did not want the sibling to breed together or fight.

The event was aimed at educating children.