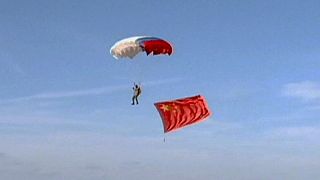 China has been showing off its military might by triumphing in a parachuting competition in Russia.

The Asian superpower beat the hosts and Belarus to first prize, awarded to the country that is quickest to evacuate its parachutists.

The contest formed part of the International Army Games, being hosted in Russia during the first fortnight of August.

No NATO members are participating.