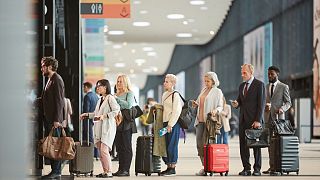 The EU's post-Brexit Entry-Exit System (EES) has been delayed once again.

This means non-EU travellers entering the Schengen Area will be spared the anticipated chaos of the new border controls a little longer. It also means there aren't many ways for countries to check whether non-EU travellers have overstayed the 90-day limit currently in place.

What is the EES?

The Entry-Exit System will be an automated registration system for UK and other non-EU travellers who don’t require a visa to enter the EU.

Travellers will need to scan their passports or other travel document at a self-service kiosk each time they cross an EU external border. It will not apply to legal residents or those with long stay visas.

The system will register the traveller’s name, biometric data, and the date and place of entry and exit. Facial scans and fingerprint data will be retained for three years after each trip.

It will apply when entering all EU member states, apart from Cyprus and Ireland, as well as four non-EU countries in the Schengen Area: Iceland, Lichtenstein, Norway and Switzerland.

The EES is being introduced to bolster border security and identify travellers who overstay their permitted time in the Schengen Area (90 days within a 180 day period).

How was the travel industry reacted to the delay?

The airline industry have supported the delays as it gives more time for preparations to be made.

“The EES will be a game changer for how the EU’s borders are managed. There are, however, a number of issues which must be resolved to ensure a smooth roll out and operation of the new system so that air passengers do not face disruptions,” a joint statement from the European region of Airports Council International (ACI), Airlines for Europe (A4E), the European Regions Airline Association (ERA) and the International Air Transport Association (IATA) says.

The coalition pointed to a need for “wider adoption and effective implementation of automation at national border crossing points by national authorities, funding by member states to ensure a sufficient number of trained staff and resources are deployed to manage the EU’s external border, particularly at airports.” They also said airlines and airports should be given "sufficient resources” to faciliate with the new rules.

The organisations also said there needs to be a public communications campaign to inform travellers of the changes.

Is ETIAS still on track?

The EES is connected to the European Travel Information and Authorisation System (ETIAS). This new scheme obligates non-EU citizens who do not require an EU visa to gain travel authorisation to enter the bloc. The visa waiver will be mandatory for anyone wishing to visit the Schengen Area short term.

Travellers will be able to apply for ETIAS online before their trip at a cost of €7. Once approved, the electronic travel authorisation will be electronically linked to their passport and will last for three years.

Why has the EES been delayed?

As with the first round of delays, challenges with contractors meeting deadlines have been cited as the reason for pushing the EES back.

Automated EES barriers need to be installed at all international land, maritime and air borders in the Schengen Area. Travellers will be able to register their details at self-service kiosks and on mobile apps in some countries, after which border guards or e-gates will complete the checks.

It is unclear exactly when the system is now set to be introduced. This should become clear in March 2023 when a new timeline is presented for approval.

How will the EES impact travel?

In the UK and elsewhere, there are concerns that the EES could increase delays at border checkpoints.

In a European Council report released by non-profit Statewatch, various countries express concern over the EES implementation delays. They say the amount of time they will have to test the system prior to its launch is rapidly decreasing.

French authorities will operate EES border checks at the UK’s Port of Dover, Eurostar and Eurotunnel. They are currently working with the UK government to minimise the system’s impact on border flows and traffic, but express concern about potential waiting times.

Other countries are still working on EES implementation plans, too. The European Commission has suggested that the system may need to be introduced in a gradual and flexible way to reduce the likelihood of long waiting times at borders.