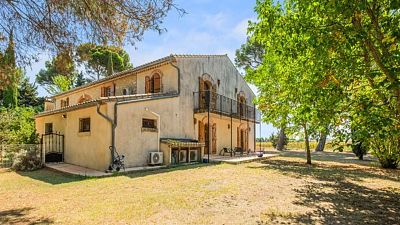 Stuck for inspiration and staring at a blank document one drizzly morning in May, I decided I needed to find my mojo again.

So when an email inviting me on a week-long writing retreat landed in my inbox the very same day, I took it as a sign and, before you can say lined jotter pad, had booked myself on a flight to Carcassonne in the Occitania region (formerly Languedoc) of southern France.

I’m greeted at the airport by Moira Martingale, a British author and ex journalist. She set up 'French House Party' in 2007 and now runs writing and other courses from her 200-year-old farmhouse in the French countryside.

After unpacking and settling in to my room, I'm introduced to the others in the group and our tutor, Sarah Hymas, a published poet and mentor who’s been with FHP since its inception.

Two Americans, an Australian and a couple of Brits (maximum group size is 16) make up my fellow scribblers and we're soon chatting like old friends over local wine and canapés on the terrace.

We’re treated to home-made risotto, pavlova and as much French cheese as we can handle.

Sarah asks us what we're hoping to achieve from the week and we take turns to tell her what we’re working on, if anything, and what we feel we need help with.

Among us is a published science fiction writer, a would-be poet and someone who’s having a first attempt at writing a memoir. My aim is to write a short story by the end of the week.

After hearing everyone’s testimonies, I’m impressed by their commitment and buoyed up by their enthusiasm.

Later that evening, conversation and getting to know each other continues over a three-course dinner, where more wine flows and we’re treated to home-made risotto, pavlova and as much French cheese as we can handle.

How does a writing course at French House Party work?

After a good night’s sleep in the stillness of rural France and an al-fresco breakfast the next morning – the table heaving under an assortment of croissants, cheeses, hams and freshly baked bread – I’m ready to get down to business.

At that morning’s one-to-one with Sarah, I’m given a printed sheet with tips and hints. Part of her job, it says, is to ‘encourage participants to keep on writing when the dreaded ‘block’ strikes’. As someone who’s often plagued by procrastination and dithering (I blame the internet) this is good to know.

Sarah’s husband Floris Tomasini, a therapist and lecturer in philosophy, has accompanied her on the trip and is offering optional guided mindfulness sessions around the grounds before breakfast.

Staring out at the acres of blonde wheat fields that run in front of the house and the ancient Catholic church in the village of Pexiora in the distance.

I make an effort to get up early a few mornings and find the sessions a good way to limber up for the day ahead. All staring out at the acres of blonde wheat fields that run in front of the house and the ancient Catholic church in the village of Pexiora in the distance.

Floris lends me his binoculars one day and I spot a Zebra-striped hoopoe bird, up from Africa for the summer.

Another good omen, I think.

There’s more to a writing retreat than just writing

The Canal du Midi, a 240km-long canal built in the 17th-century and considered one of the greatest construction works of the period, is a 20-minute walk, or a 10-minute bike ride, away from the house. There you can sit and write on the banks or watch holidaymakers in their hired barges trying to negotiate the lock.

A day trip to Carcassonne - Moira drops guests off and picks them back up from the local train station - breaks up the week and gives me some time off from thinking about how I’m going to develop my story/ wondering if I’ll ever get it finished.

Although Carcassonne is a tourist honeypot, it is worth visiting for its medieval cobbled streets and fairytale castle.

The walled city, a fortress that dates back to the Gallo-Roman era, was added to the UNESCO list of World Heritage sites in 1997.

Although it’s a tourist honeypot, it is worth visiting for its medieval cobbled streets and a fairytale castle worthy of Rapunzel herself.

Toulouse, Narbonne and the pretty market town of Castelnaudary are also doable in a day.

After a few days, I’ve settled into my writerly routine: breakfast, a leisurely dip in the outdoor pool and then on with the hard bit, the actual writing.

By the end of the week, I’ve finished my short story and even started another one.

On the last night, we’re invited to read our work aloud to the group.

I’m impressed by everyone’s efforts and slightly nervous about reading out my own although feel I’ve gained enough confidence over the last few days for it not to be too traumatic.

I settle into my routine: breakfast, a leisurely dip in the outdoor pool and then on with the hard bit, the actual writing.

I leave the workshop full of purpose and make a resolution to join a short story writing course once I’m back home. Something I’m happy to confirm I have now signed up for.

As well as writing, FHP’s other workshops include gourmet cookery with Michelin-starred chefs, digital film making and songwriting. You can also organise your own group holiday.

Mike Batt, the renowned British record producer and writer of ‘Bright Eyes’ (which was a number one UK chart hit for Art Garfunkel) is lined up for August’s songwriting course.

FHP writing workshops start at €1,039 based on two people sharing and include accommodation in an air-conditioned room, local airport transfers, all meals and wine, dinner with wine in a local restaurant and return train tickets to Carcassonne.