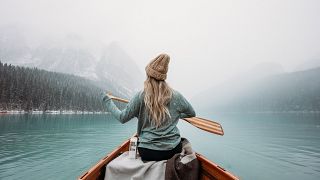 ‘Nature positive travel’ encourages tourism that has a positive impact on the environment.   -   Copyright  Boxed water is better
By Rebecca Ann Hughes  •  Updated: 31/12/2022

In recent years, travellers and the travel industry have become much more conscious about reducing their impact on nature.

Now, the World Travel and Tourism Council (WTTC) wants visitors to start leaving a trace - a positive one.

The committee has launched the ‘nature positive travel’ initiative which encourages tourists to put nature first.

The idea was presented just before COP15, the recent United Nations biodiversity conference held in Montreal.

How does travel damage nature?

“Eighty per cent of all travel involves the traveller going into some form of nature,” Julia Simpson, president and CEO of WTTC, told the New York Times.

This might be lying on a beach, snorkelling in coral reefs, hiking a mountain or trekking through mangroves.

Travellers are becoming increasingly conscious about leaving as little trace as possible on the natural surroundings.

But an impact is always felt.

The WTTC reports that travel and tourism is one of six economic sectors with over 80 per cent of its goods and services highly dependent on nature.

What is ‘nature positive travel’?

To curb travel’s negative impact on nature, the WTTC has released a report presenting their new concept of ‘nature positive travel’.

This encourages travellers and the travel industry to actually leave a footprint, as long as it's a positive one.

The initiative aims to raise awareness of the value of biodiversity, analyse the impact of travel companies on nature, collaborate with local communities as guardians of nature and invest in species protection and habitat reconstruction.

Simpson has called the idea “a practical guide for our industry.”

How can the travel industry make a positive impact on nature?

The WTTC report discusses several ways the travel industry can leave behind a positive footprint in nature.

The initiative urges governments and the tourism sector to make connections within communities to protect and safeguard nature.

Simpson gives the example of South Africa where rhino poaching is rife.

“Many organisations, including government agencies, private conservancies and safari lodges, have incentivised people so that local communities actually can earn more by protecting their rhinos,” she explained.

Similarly in Rwanda, the government is working with local people to return land converted for agriculture into forests where gorillas can live.

How can hotels become more sustainable?

Rebuilding nature is an important theme in the report. It emphasises that hotels and resorts should also be working on ‘green investment’.

“I was just at a resort in Bali that is using 3D printers to print coral and plug it back into places to start rebuilding the reef and protecting the fish stock,” Simpson told the New York Times.

Hotels should also be evaluating the sustainability of their energy sources and food supply chains. Growing food on site is one way to avoid transport emissions.

How can travellers make a positive impact on nature?

On an individual level, travellers can also help safeguard nature.

“At hotels, you don’t need to get your sheets or towels changed every day. If hotels have plastic, ask why,” Simpson said.

“In a hotel with small plastic bottles of shampoo, drop an email to the hotelier.”