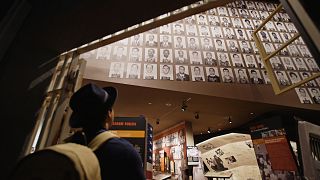 Jackson, Mississippi, was at the centre of the U.S.civil rights movement throughout the 1950s and 1960s.

The home of activists like Medgar Evers and the site of some of the most nationally significant protests of the period, Jackson was the heartbeat of the fight for equality in the United States.

Of all the cities in the American South, Jackson tells both the sad stories of oppression and slavery, as well as the inspiring stories of the fight against racism.

You can still visit the site of the 1963 sit-ins that prompted President John F. Kennedy to speak out against segregation, as well as the Greyhound Bus Station made famous by the Freedom Rides of 1961.

The Mississippi Freedom Trail spans the city, and we’ve picked out a few must-visit stops along the way to help you learn about Jackson’s poignant history.

Medgar Evers was a pioneering civil rights leader who lived in Jackson. One of the many African American men who fought in World War II, Evers returned from Europe where he had taken part in the Normandy landings only to be turned away from the polling station at gunpoint.

One of his earliest landmark campaigns was the boycotting of gas stations, which wouldn’t allow Black Americans to use their restrooms. Evers then became a field officer for the National Association for the Advancement of Colored People, and he tirelessly fought the segregation of education.

After starting an investigation into the lynching of Emmett Till, Evers drew the ire of white supremacists and was eventually shot and killed as he carried t-shirts printed with ‘Jim Crow Must Go’ into his home.

The house that Evers shared with his wife and family has been restored and is now a museum in his honour. It’s a must-see on your trip to Jackson, Mississippi.

Learn the full-story at the Mississippi Civil Rights Museum

No Civil Rights Trail experience in Jackson would be complete without a trip to the Mississippi Civil Rights Museum.

In this unique and moving museum, you can see the stories of the civil rights movement unfold through the eyes of those that were there.

Across eight galleries, the journey of African Americans is told from the Transatlantic Slave Trade to today, encompassing everything from Civil War reconstruction, Jim Crow, Brown v. the Board of Education and the murder of Emmett Till.

The personal accounts of those touched by this critical era and the unique artefacts on display are not to be missed, while the beautiful architecture and art make for a meditative experience.

There’s no way to talk about civil rights without talking about the Blues, the genre that gave voice to the Black experience in the American South.

The Mississippi Delta is where the Blues was born, and Jackson is home to some classic juke joints and Blues bars that keep the spirit of the blues alive.

At one time the Farish Street Historic District was the heart of African American culture, and although today it is a shadow of its former glory you can still go there to visit authentic juke joint F. Jones Corner.

F. Jones Corner serves up classic comfort food which you can enjoy in a community atmosphere. Provided alongside these good times are performances by local and regional Blue acts which keep the music alive in this nationally registered historic place.

Meanwhile, fellow local staple Hal & Mal’s provides regular live music events whilst treating guests to delicious Southern cuisine. This is a must-visit for any tourists hoping to sample the real flavours of Jackson.

At one time the biggest centre for Black-owned businesses in Mississippi, Farish Street is now a monument to African American cultural and social life during segregation.

In the post-war boom of the 1940s-1950s, Farish Street was bustling with customers as the Black residents of Mississippi grew their own community and places of commerce, since they were barred from white spaces by Jim Crow laws.

As a result of the Civil Rights Act of 1964, many African-Americans took their businesses elsewhere, causing the decline of the area despite many attempts to revitalise it.

Farish Street remains on the National Register of Historic Places and has commemorative markers on remaining buildings of significance like the Alamo Theatre.

Rendez-vous: The best of culture and arts in Europe