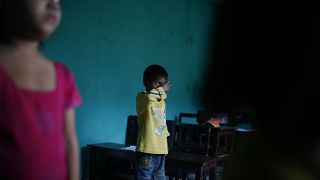 For decades, travellers have been embarking on ‘voluntourism’ trips to developing countries.

These kinds of trips offer placements for travellers in many different sectors and many volunteers end up working in orphanages.

While people may have a genuine desire to help disadvantaged children, some end up fuelling complex systems of abuse and profiteering without even knowing it.

We spoke with experts from organisations campaigning to change this. Here’s what we learned.

What is orphanage tourism?

These trips can last up to a year and are especially popular among young people taking a year out between school and university. The work tends to include playing games with the children, singing songs or teaching English.

Aisling Ledwith, an advocacy and campaigns officer at child empowerment NGO Lumos, tells Euronews Travel that orphanage tourism is especially prevalent in countries that have been impacted by natural or national catastrophes. Kind people see these disasters on the news and feel compelled to help, she says.

Haiti is one example of this - the earthquake that struck in 2010 killed over 300,000 people and left 1.5 million without homes.

But when children become tourist attractions, it creates problems.

Joseph M Cheer is a professor and social science researcher at the Center for Tourism Research at Wakayama University in Japan and co-author of a book on the sbject, ‘Modern Day Slavery and Orphanage Tourism’. He says that orphanage tourism dehumanises the people at the heart of it.

“We go to another country and see it as a spectacle or a Disneyland, not necessarily made up of humans living normal lives, but this kind of consumption of people,” Cheer explains.

“You see people cuddling a black child on Instagram and saying, ‘How wonderful am I? I've gone here, it's great for my CV.’”

How is orphanage tourism damaging children?

In eight out of 10 cases, the children in orphanages are not orphans, according to Hope and Homes for Children - an international charity that works to stop the institutionalisation of children.

The experts we spoke to say there are about 5.4 million children living in orphanages worldwide, but 80 per cent of them have living families that could care for them with the right support.

“It's very common for children to be trafficked into the orphanages and taken away from their family, either through force or coercion, and placed in these orphanages where they're often kept in poor conditions to elicit sympathy from volunteers,” Ledwith from Lumos says.

It's very common for children to be trafficked into the orphanages and taken away from their family.

At an orphanage in Haiti, Morgan Wienberg, founder of Little Footprints Big Steps, witnessed this first-hand.

She explains how impoverished families would agree to give their children over to an orphanage temporarily - in hopes that they’ll be able to provide schooling and better conditions - but the orphanage would then keep the children for longer than agreed, or sell them. Wienberg says she was offered a child for $800 (€823).

Volunteers are rarely background checked before being invited into orphanages, according to the experts we spoke to, even though this would not be allowed in their home countries.

“You cannot just turn up at a primary school [in the UK] because you want to help… that would be an absolutely ridiculous idea,” Wayne Cornish from Hope and Homes for Children.

“I visited orphanages where sometimes tourists are actually allowed to stay overnight and rent out beds."

Weinberg expands on how dangerous this is.

“There are many cases where… people who are coming under the title of missionaries or volunteers are actually paedophiles, and [they] come in and sexually abuse the children,” she claims.

The dire living conditions of an illegally operating orphanage

Seeing the living conditions at an orphanage in Haiti is what drove Wiener to create Little Footprints Big Steps - a non-profit that works to protect vulnerable children in the country. She still lives in Haiti today.

“When I went to volunteer, I was introduced to a locally run orphanage,” she says. “The conditions of the children were the worst I’ve seen in any humans.”

Wienberg describes how the children were emaciated, severely dehydrated and fed white rice just once a day. When she tried to give the children nutritional supplements and peanut butter, the orphanage owner forbade her to do so because she didn’t want the kids to defecate.

“I just ignored her and continued putting it on all the children's plates,” Wiener says.

"And, you know, peanut butter is one of their favourite foods. So if you can imagine, some of the children sat and ate around it, even if it was on their plate and they were hungry… they didn't eat it because they were afraid of the orphanage owner.”

Wiener says that kids who ate the peanut butter and soiled themselves after would be beaten by the orphanage owner. On at least one occasion she had to step in.

Volunteers would regularly be coming in and out of this orphanage, according to Wiener.

The organisation that she travelled with “would bring hundreds of volunteers every week… and they would cry when they saw the conditions of the kids.” The children were expected to take photos with the volunteers.

After giving the kids some candy and playing with them, the volunteers would leave, and the kids would remain in the same conditions.

How do orphanage owners use tourism to their advantage?

Most tourists go on voluntourism trips with a genuine intention to help. But experts say the donations they give are sometimes pocketed by the orphanage owner. And worse living conditions often make for higher donations.

Lumos spoke to a volunteer who returned to an orphanage on four different occasions. The NGO found out that in between visits, the improvements she made while there had been undone.

“She started to realise that they wanted the orphanage to be in bad condition in order to keep getting donations,” Ledwith explains.

Sometimes, donations even go towards building accommodation for tourists.

One orphanage I visited spent thousands of pounds on a grant to build a luxurious apartment for American tourists.

“Instead of actually putting that money into trying to reunite the children with their families, one orphanage I visited spent the thousands of pounds on a grant to build a luxurious apartment for American tourists who would like to go over and pay to stay,” Cornish says.

“All that money went into these glorious apartments,” he adds. “Then the American students would come over thinking they're doing a good thing, and pay to stay in these lovely apartments.”

Cornish says that the money from these trips ended up in the pocket of the orphanage owner.

Governments don’t always have the resources to end orphanage tourism

Governments might be aware that orphanages are operating illegally or for profit, but don’t always have the resources to shut them down.

Wiener recounts that while working at one orphanage in Haiti, five or six different NGOs were providing support. Meanwhile, she says, it was operating illegally and wasn’t registered with the Haitian government.

Alongside the government, UNICEF and Save the Children agreed that the orphanage urgently needed to be shut down because of neglect and abuse.

But it’s not that simple.

“The orphanage is able to continue running because of this imbalance of resources,” Wiener explains.

“Even if the government wants to shut it down because of the poor conditions, and because the children have families but the government is under-resourced.

Out of the 749 orphanages operating in Haiti, only 35 are government-approved, Wiener adds.

How can we combat orphanage tourism?

Lumos has been working closely with universities under the #HelpingNotHelping campaign, asking them to sign a pledge not to promote or fund any volunteering trips of this sort.

ABTA, Hope and Homes for Children and the UK border force are also running a campaign this month. Specialist border officers from Heathrow, Gatwick and Manchester airports will talk to travellers heading to destinations where orphanage tourism is common and educate them about the realities of orphanage tourism.

“We're just trying to dispel a myth that orphanages are a good place to visit, and trying to help inform the public to maybe think twice and just look into it a little bit more,” Cornish says.

“Visiting orphanages is not the best way to help children… the best thing to do is to help them to grow up in a family because that's where children belong.”

Thousands of children in Ukraine's orphanages 'face being left behind'

Trash to trunks, a field guide to voluntourism and other trends

Leaving no orphans behind