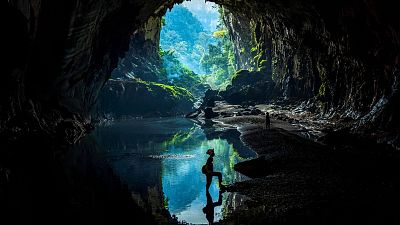 Illegal loggers in Vietnam are getting a chance at an honest living, thanks to one adventure tourism company.

Tour guide Ngoc Anh is familiar with the jungle. He used to illegally chop down the valuable trees that grow there to sell as timber.

But, as extreme rainfall and floods devastated his community, Ngoc Anh started reading up on climate and nature crises. He came to realise the value of conserving this environment.

"Before, whenever I saw a large tree, my head calculated how tall the tree was and how to cut it into logs of different sizes," Ngoc Anh says.

“But now that I'm in the tourism business, when I see such a tree, I tell the tour group how valuable this tree is because there aren't many left."

How has deforestation impacted Vietnam?

Vietnam has lost about three million hectares of tree cover between 2001 and 2020, a 20 percent drop. Since 2007, the Vietnamese government has cracked down on illegal logging, which has helped to slow the deforestation rate.

The country also joined a global pledge to end deforestation by 2030.

"Normally, tourism is bad for conservation but it's the opposite here because we've employed all the people who were doing illegal activities,” says Howard Limbert, the head of the British Cave and Research Association.

“We find now there's a lot more animals in the jungle, they're more protected because of tourism.”

It’s unusual, he adds, but it appears to be working well in this area.

The guides earn less than half of what they used to in their logging days but hope to make more as tourism and travel gradually pick up.

What’s there to do in central Vietnam?

The park is riddled with hundreds of cave systems, underground rivers, and the oldest karst mountains in Asia.

Above ground, visitors can trek through the forests and mountain bike, all while getting a sense of the area’s war history.

Watch the video above to see the tour guides in action.

What can the world’s Blue Zones teach us about extending our lifespan?