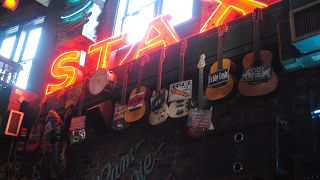 “There is a reason why I was excited about Memphis,” says Naftaly.

“It is the birthplace of rock ‘n’ roll, blues, everything that is cool..”

Naftaly‘s love of Memphis and its status as the birthplace of soul music began in his home country of Israel where he grew up listening to his Dad’s worn-out cassette tapes of the artists from the Memphis-based record label Stax Records.

Now a successful guitarist in the Memphis-based group Southern Avenue, Naftaly is living his childhood dream.

“I was exposed to the Memphis sound from the age of six, I was drawn to that beat and the feel of the music,” says Naftly.

“That realness and authenticity - that is why I moved here.”

But what is it about Memphis that drew the musician halfway around the world?

What is the history of music in Memphis?

Memphis sits on the Mississippi river, built on the high ground above the floodplains of the southerly Delta, and for 200 years the city has been a place where cultures mingle.

During the 1800s, slave-picked goods came from the agricultural south and traders came from the industrial north, making the city a melting pot which brewed music genres that influenced the world.

Pre-World War I the urban setting gave birth to the Memphis Blues which saw the artists Furry Lewis and Memphis Minnie reach audiences across America, but it wasn’t until the post-World War II boom that the city really hit its stride.

Although located in the American South, characterised at the time by Jim Crow segregation laws and the horrors that accompanied them, the music from Memphis became a place where the racial lines blurred.

Beale Street in central Memphis saw an explosion of blues clubs and bars, and in 1954 Memphis’s most famous star - Elvis Presley - was signed by Sun Records.

As predominantly white country musicians and African-American gospel singers fused in Memphis, new genres of rock’n’roll, soul, and rhythm and blues (RnB) were created. Giving birth to the legend of the Memphis sound, which drew in Naftaly decades later.

An integral part of the sound of Memphis is Stax Records, a record label that produced the soul sound that came to define a decade.

It started in a garage in North Memphis and was set up by fiddle player Jim Stewart in 1957. It was then moved downtown to Capitol Theatre in 1959.

Operating in earnest from the eve of the 1960s, Stax had one of its first hits in 1961 with ‘Last Night’ an instrumental by local, multiracial group The Mar-Keys.

Many of Stax’s other groups like Booker T. and the M.G.’s were also multiracial. The record label was characterised by crossing social boundaries and brought disparate communities together through a love of music.

However, the multiracial music at Stax wasn’t loved by everyone.

“All that music that came out of Stax…those were considered race records in the 1960s,” says Tim Sampson, the communications director of the Soulsville Foundation, the nonprofit organization that operates the Stax Museum of American Soul Music in Memphis.

Stax turned out countless artists like Otis Redding, The Staple Singers, and Albert King but it wasn’t always smooth sailing.

In 1968, Stax lost all of its product in a fine-print deal, and in an ensuing effort to rebuild the label a two-month long recording session called the ‘Soul Explosion’ took place. After this, Stax became a victim of its own success, and when Wattstax concert in 1965 drew the second-largest audience of African Americans after the March on Washington for Jobs and Freedom, the label drew unwanted attention from the powers that be.

“People started to look at Stax like it was a Black power enterprise,” says Sampson.

In the ensuing political and financial fallout Stax was forced into involuntary bankruptcy, but its music and rejection of segregationist politics has never lost its influence. The museum Sampson works for now runs a prep school and music academy for disadvantaged kids in Memphis.

The fingerprints of Memphis music are ever present in the contemporary music scene.

Needless to say that Elvis remains popular, while Led Zeppelin, Jimi Hendrix and even the Rolling Stones also have connections to the city.

Stax’s legacy is preserved in the museum that Sampson helped to build in a derelict parking lot. But the music has not stayed in history. RnB artists such as Salt 'N' Pepa to En Vogue have sampled the music of Stax artists.

“We’re seeing Stax artists getting money for artists that have sampled their work - money they never thought they’d see and it can be a lot,” says Sampson.

As well as contemporary RnB, the genre of nu-soul owes a debt to Memphis with artists such as Drake and Frank Ocean who are heirs to the sound that came from the Tennessee city.

Meanwhile, Beale Street is still one of the must-go places for music lovers who can check out live music venues like B.B. King’s Blues Bar, Rum Boogie, and Bar DKDC, where Naftaly was signed in 2017.

“It is a thriving scene in Memphis right now,” says Naftaly.