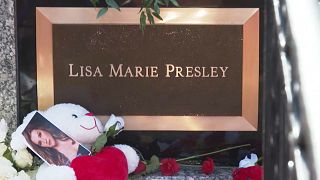 Hundreds of people gathered on the front lawn of Graceland in Memphis to mourn the death and remember the life of Lisa Marie Presley.

The 54 year old singer songwriter and only daughter of one of the world's biggest stars Elvis, died on the 12th of January.

Jordan Clark, a Lisa Presley fan thinks that Presley went through a lot, "she was born into the public, born into fame and that's hard for some people. She handled it like a champ, I think. She handled it well. So, to have known her and met her previously, it's just an honor."

Another fan, Chelsa Brinkman, said Lisa was "the guardian and the keeper and protector of her fathers' legacy and of course he was the sunshine of her life, so I'm not really surprised at the amount of people who came."

In her memorial service, she was remembered by the city's former Mayor as the city's precious jewel every day of her life. Presley was buried in a private ceremony last week in the family plot at Graceland, next to her son.

Elvis Presley fans celebrate in German city where he lived