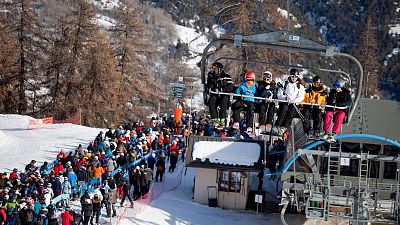 Ski resorts across Europe are gearing up for their biggest winter season since COVID struck, but soaring energy prices may throw another spanner in the works.

Electricity is key to keep resorts ticking, from lighting up chalets to running ski lifts like clockwork. All this is costing more and more, however, jeopardising the reopening of some slopes.

France has brought in a range of energy-saving measures recently, from turning off the Eiffel Tower earlier to dropping the temperature of swimming pools.

So what’s the view on Macron’s ‘energy sobriety’ plans from the mountaintops?

Will French ski resorts be able to open this winter?

Electricity bills for French ski resorts and lift operators could multiply by up to eight times next year, warns Anne Marty, deputy president of the Domaines Skiables de France (DSF) union, and deputy general manager of Altiservice, which runs a number of resorts in the Pyrenees.

Those whose contracts expire in January face particularly sharp rises, she says. At Altiservice’s resorts of Saint-Lary and Font-Romeu, bills could soar to €15 million from €2 million in the worst-case scenario, sending the tourist hotspots into the red.

Sébastien Giraud, who manages Villard-de-Lans station in the Vercors Massif, also had some stark figures to share. “We are unable to sign a new contract with EDF given the proposals made to us,” he told France 3 radio station.

“The electricity bill would represent between 20 per cent and 25 per cent of our turnover, against 5 per cent currently,” he said, adding “We will not be able to pay it. As things stand, we won't be able to open.”

Current electricity prices are "a huge obstacle", agreed Fabrice Boutet, general manager of the SATA group which manages lifts at several ski resorts. The group's energy bills are set to rise from roughly €2 to €20 million, he told AFP.

Should chairlifts be considered a ‘means of transport’?

With businesses determined to open this winter, owners are asking for government support to see them through.

Marty argues that “chairlifts are a means of transport, just like buses or metros. Ski lift managers have a responsibility to the public. They therefore have an obligation to open.”

The DSF is calling for ski lift companies to receive the same state support as energy-intensive companies in other sectors are benefiting from. Frédéric Géromin, president of the union’s Isère region, has also suggested the government could bring in a tariff, shielding lift operators like households who have had energy bills frozen at a four per cent rise.

So what does it mean for avid skiers? If ski lift and gondola operators are forced to close, that would of course have knock-on effects for the whole mountainside ecosystem, including ski schools, restaurants and hotels.

How are ski resorts saving energy?

Holidaymakers are more likely to see subtle changes, however, including slightly slower ascents.

“The priority is to adopt a sobriety plan to reduce our consumption as much as possible,” DSF president Alexandre Maullin told RCF listeners. “With a little ingenuity, we can all come up with a 10 per cent drop [as Macron has requested of businesses].”

Some slopes could be served by one cable car rather than two during off-peak periods. Other lifts’ speeds could be lowered from six metres to four metres a second, and “the skier will not realise the difference”, said Maullin.

More noticeable will be a likely hike in the price of ski holidays. “Part of the additional cost will inevitably be passed on to the end customer,” says DSF. Though Géromin says businesses will do what they can to avoid this, with French and other tourists already suffering from inflation.

Resorts that have been investing in renewable energy will feel the benefits this winter.

Serre Chevalier, in the Hautes-Alpes region, is the first ski area in the world to produce its own electricity using three clean energy sources. Hydroelectricity, solar panels and small wind turbines feed 30 per cent of its total consumption, powering ski lifts, machine rooms and snow-making systems.

It has already experimented with reducing the speed of lifts when there are fewer skiers, with 70 per cent of the users giving them the thumbs up.

A more existential and far reaching threat to ski slopes is climate change, so it makes sense that resorts are also looking to cut emissions while saving energy.

95 per cent of greenhouse gas emissions in ski areas are produced by snow grooming machines, according to Serre Chevalier. So it’s also looking to switch from diesel to HVO fuel, and leave more slopes ungroomed, or “brutes de neige”.