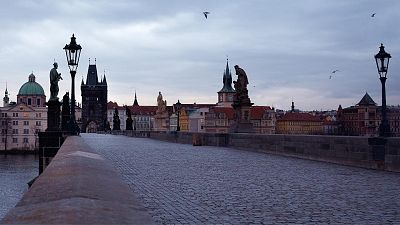 A tourist has been fined 2,000 koruna (€81) for driving over Prague’s iconic pedestrian-only Charles Bridge.

Police said that a witness alerted them to the car crossing over the bridge. They then used security footage to identify and locate the vehicle - which had been left in a paid parking zone without paying.

“The driver of the white Audi did not want to explain to officers whether he had been guided to the Charles Bridge by his navigation system or whether he was just driving from Mostecká Street ‘as fast as he could’,” the city’s police force wrote in a Facebook post.

The footage, posted on the social media site, shows the car driving across the bridge, passing over the pavement and then joining the road by merging with other vehicles.

What is Prague’s Charles Bridge?

Charles Bridge is a 515-metre long, 10-metre wide medieval stone arch bridge built in the early 15th century. It is decorated with intricate baroque statues that were first installed around 1700, though they have now been replaced with replicas.

The bridge crosses the Vltava river in Prague, Czech Republic and was the only means of getting across this waterway until 1841.

The bridge is a popular tourist attraction connecting the city’s Old Town and a number of other districts. You may have spotted this iconic landmark in films like “Spider-Man: Far From Home” and “Mission: Impossible”.

It is currently undergoing a twenty-year process of structural inspections, restoration and repairs that started in 2019 and is expected to cost up to 60 million koruna (€2.44 million).

Why are cars not allowed to cross the Charles Bridge?

Horses, carts, trams and even buses have passed over the bridge during its lifetime. At the beginning of the 20th century, this traffic started to become heavy.

A series of inspections and repairs took place in the 1960s and 70s with guidance from various leading scientific and cultural institutes. After this, all vehicles were banned from crossing the stone structure.

The tarmac top layer was removed from its surface to reveal cobblestones and it was made accessible by pedestrians only.