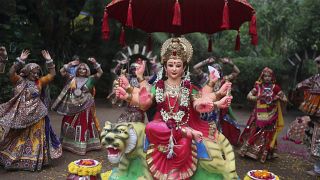 Tonight, over 1 billion people will begin celebrations for one of the most important festivals in the Hindu calendar.

Preparations began earlier this week for the event - called Sharad Navaratri, in full - which takes place over nine nights every autumn in celebration of the Hindu mother goddess, Durga.

Almost 80 per cent of India’s population identify as Hindu, making this festival an extremely important event in the calendar.

Almost 80 per cent of India’s population identify as Hindu

Navaratri is celebrated differently in India’s various regions: For many people, it is a time of religious reflection and fasting. For others, it's a time for dancing and feasting.

In the western state of Gujarat, celebrations include the traditional Garba dance. This is a high energy dance performed in elaborate traditional attire, in concentric circles around a shrine to the divine feminine.

Navaratri - which comes from the Sanskrit words for nine (nava) and nights (ratri) - takes place across the nine nights following the first new moon after monsoon season.

Although there are officially four seasonal Navaratri per year, it is this post-monsoon autumn festival that is the most observed in India in honour of the mother goddess, Durga.