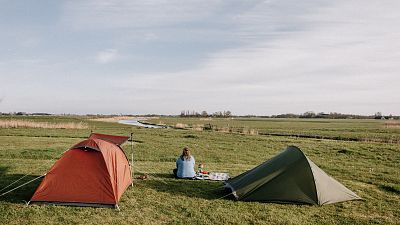 With the cost of living spiking across Europe, more and more holidaymakers are turning to camping instead of paying for hotels.

And one trend, which took off during COVID, is garden camping, or 'gamping' as it's known by some.

For prices usually much cheaper than campsites, and for locations more private, secluded and closer to nature, greater numbers of tourists are paying to stay in someone’s garden or field.

Most have spartan facilities: an outdoors toilet and a BBQ pit. Many are in a farmer’s field. They may lack the services of a traditional campsite, but gamping enthusiasts argue you can get closer to nature and local culture.

During the pandemic, when hotels and campsites were closed, and when people couldn’t travel too far from their homes, they allowed people to have convenient short breaks. During 2022, amid a cost of living epidemic, they’ve offered campers a holiday at around half the price of traditional camping.

Campspace, a Netherlands-based online platform that lists gamping plots, told Euronews that their booking platform grew by around 300 per cent in 2021, compared with 2020. They expect a similar growth rate for 2022.

Etienne de Galbert, CEO of HomeCamper, a France-based platform, says they recorded 160,000 overnight stays in 2021 and expect between 250,000 and 300,000 this year. Unlike most traditional campsites, which tend to close after the peak months of the summer, gamping is all-year round, he adds.

Gamping typically involves someone who owns a piece of land, usually with basic amenities, renting it out for a few nights. But listings on the online gamping platforms are also for people renting out their yurts or caravans to visitors. Farm stays and tree-house lodgings are also on offer.

Cost, naturally, is one attraction. The average price of an overnight stay for two people in a private garden in France, including services, is €12.50, said de Galbert. That’s half what an ordinary campsite would cost. A hotel room in France per night would set you back €85, on average.

Prices for a night on a regular campsite during peak season vary across Europe, according to Camping.info, a website that compiles such data.

For two adults, a pitch, electricity and local taxes, prices were around €36 in Switzerland and Italy, and almost €25 in Britain and France, in 2019. Prices tend to be lower the further east you go. The average cost of a campsite per night in the Czech Republic and Poland was around €16.

But it’s much more than just saving pennies.

“The main difference between garden camping and traditional campsites is that our guests can have sustained rapports with the hosts, they can get advice on activities in the area and sometimes even share a meal,” says Abma, of Campspace.

“It’s a much more personal and 'slowed down' experience than that of large campsites, which are often crowded and run more with business than hospitality in mind.”

No one really knows when gamping started.

Sources who spoke to Euronews say the concept has been going on since time immemorial. In past centuries it wasn’t uncommon for people to allow a wayward traveller to sleep for free on their land for a night.

In our internet age, the originator of the movement is often considered to be Joseph Léopold, a French entrepreneur who in 2013 founded Gamping.fr platform (now part of HomeCamper), the first website to offer an untraditional experience to travellers.

Since then, it has grown as tourists have changed the way they want to travel.

A study published by Booking.com in April found that 81% of travellers want to stay in sustainable accommodation. Some 73% are after an authentic experience that takes in the local culture. Nearly a quarter (23%) want to travel to a destination closer to reduce their carbon footprint.

“As people become more aware of our climate crisis, our airports get more and more chaotic and human interaction becomes even harder to come by, we think ‘gamping’ will grow in popularity,” says Abma.

Some platforms are focused on the social, rather than the business, side of gamping.

Manon Brulard is co-founder of the Belgium-based Welcome To My Garden, which focuses on “slow travelling” and all listings on its website are for free.

“Were so inspired by the hospitality we had received on our way that we asked ourselves how we could facilitate that in Belgium as well,” he said.

"Wild camping is forbidden in many countries (including in Belgium) and as you can't find affordable accommodation options overall, this makes it hard for slow travellers to find safe and nice spots to stay overnight.”

Unlike other gamping websites — and Brulard doesn’t consider his service to be gamping — all listings are for free. People cannot drive to the locations.

“We stand for climate neutral travels; meaning that car drivers can't use our platform. They can easily drive to a camping place while slow travellers cannot.”

“We're making an impact through slow travel, thanks to thousands of people making the conscious choice to travel sustainably and meeting each other.”

“As people become more aware of our climate crisis, our airports get more and more chaotic and human interaction becomes even harder to come by, we think ‘gamping’ will grow in popularity,” said Abma.

“One of our mottos is ‘don’t waste your weekend’, because when you have small plots of nature available to you in your local area or at driving distance, we think it’s a crying shame to spend your time off stuck in a city or on your couch.”