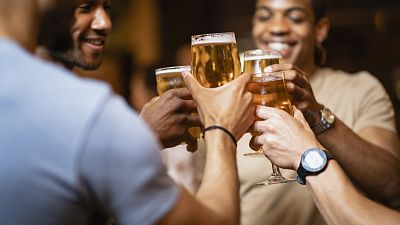 Alcohol-free bars are growing in popularity around the United States as more people are opting into a health and wellness driven lifestyle.

Designed to accommodate the growing number of people exploring sobriety, these alcohol-free bars pour adult drinks like craft cocktails - without the booze.

"It looks like a bar. It sounds like a bar. But there's something about it that's different," says Sans Bar owner Chris Marshall.

Sober bars aren't a new phenomenon. They first appeared in the US in the 19th century as part of the temperance movement, which began on a national level in the 1820s and didn’t really end for over a century, in the 1930s.

While the original bars were geared towards non-drinkers or people in recovery, the newer venues welcome the sober as well as the curious. Abstinence challenges like Dry January, which began in 2013, and a growing interest in health and wellness are being credited for the trend.

"For a lot of people, soda and juice meet their needs if they're not drinking. But a lot of people also want something that feels a little bit more grown up," he says.

Watters explains the pandemic lockdown caused him to rethink his usual pattern of ending each day with a cocktail. He started experimenting with non-alcoholic beverages, and by August, he had decided to open his store.

Many of his customers are sober, he says, but some buy his products because they’re pregnant or have health issues. Some are training for marathons, others just want to cut back on alcohol.

Joshua James, a veteran bartender, had a similar realisation during the pandemic. After spending time at a substance abuse treatment centre, he recently opened Ocean Beach Cafe, an alcohol-free bar in San Francisco.

"There are a thousand reasons to not want to drink as much," says James.

"There are people that may have had a problem with alcohol before. That's another reason. But I'm telling you right now, there's thousands of reasons and every one is different."

Would you give a sober bar a go? Press play above to find out more.

The top 10 fashion brands with the dirtiest websites revealed