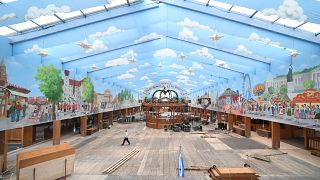 To the dismay of beer lovers around the world, the world’s largest beer festival has been cancelled for the second year in a row.

In a decision made back in May of this year, the 187th Oktoberfest was once again postponed to September 2022. Its organisers made a unanimous decision not to hold the event due to health concerns and the uncertainty of the pandemic.

To fill the hole left by this yearly Munich based event, we've decided to take a look back at the last time world's largest folk festival was held.

In 2019, it attracted more than 6 million visitors making it by far Germany’s largest annual tourism event.

A staggering 7 million litres of beer were consumed during the festival which took place over 16 days at Munich's Theresienwiese, the official location for Oktoberfest.

As well as amusement rides and food trucks, there are 14 main 'beer tents', each able to fit between 5,000 and 11,000 people, and each rocking a wholly different vibe. Some tents are more family-oriented while others are more focused on the delicious Bavarian delicacies.

Food is an important part of the festival and visitors to this Munich event consumed more than 140,00 pairs of pork sausages and over 75,000 pork knuckles or 'haxen'.

One of the highlights of Oktoberfest is the annual folk parade held on the first Sunday of the festival. It is one of the largest parades of this kind in the world.

Every year, thousands of participants don historic festival costumes to march from the Maximilianeum palace along a seven-kilometre stretch to the festival grounds.

The iconic Oktoberfest beer mugs are also a highlight of the festival. Many people try to take them away as a memento of their experience and official figures say that more than 100,000 attempts to steal the mugs were foiled in 2019.

According to organizers, the long-awaited 187th Oktoberfest will take place next year from Saturday, September 17 until October 3 at the Theresienwiese showgrounds.

This digital trail lets you explore Scotland from your living room

Córdoba: ‘The city of flowers’ is back in bloom after COVID break