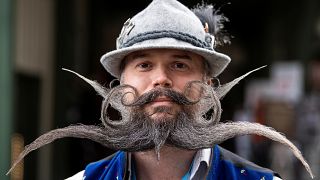 People from around the world have come together to show off their hairy assets in the world’s most competitive celebration of facial hair.

Last weekend, over 100 participants made their way to the Bavarian town of Eging am See for the 2021 World Beard and Moustache Championships, a biennial competition that puts the world’s most impressive facial hair on show.

This year’s event was hosted by the East Bavarian Beard and Moustache Club, as the event returned to its home country of Germany which hosted the first ‘Beard Olympics’ in 1990.

Here are some of our favourite styles from the event, we think they'll really grow on you.

A jury of seven trained hairdressers and barbers selected the best of the best in 18 categories, which are divided into three classifications – Moustache, Partial Beard, and Full Beard.

Competition categories range from ‘Dali Moustache’ to ‘Musketeer’, but the most impressive category has to be ‘Full Beard Freestyle’ where competitors are allowed to let their creativity flourish.

Feeling dejected about having missed the ‘Beard Olympics’?... Pull out your calendar, because the next World Beard and Moustache Championships will be taking place in February 2023 in Aukland, New Zealand.

That means you have 16 months to develop your signature style, so get growing.