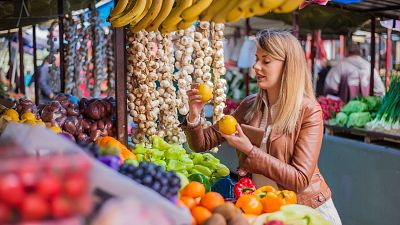 So you’ve decided to give Veganuary a try, but now you’re wondering whether this might limit your travel plans. Following our recent conversation with Wendy Werneth, creator of The Nomadic Vegan, we think you might be pleasantly surprised.

The vegan movement has seen tremendous growth over the last few years. 2020 was a record year for Veganuary - with 400,000 people signing up - almost double the figure in 2019. Now, veganism is starting to build momentum in the travel industry.

Specialist vegan travel companies and tour operators such as Vegan Hospitality, which trains and certifies tourist destinations to cater for vegans, and World Vegan Travel, which offers completely vegan tours, are beginning to emerge.

Some countries are, inevitably, more accommodating than others when it comes to vegan diets. In Southeast Asian countries such as India where around a third of the population are vegetarian, plant-based dishes are easier to come by, partly due to religion and partly due to economics. Popular dishes like vegetable samosas, vegetable biryani and channa masala are all vegan-friendly.

Likewise, due to the largely Buddhist population in Thailand, there are lots of vegan dishes available - particularly in the capital, Bangkok.

Israel has the highest proportion of vegan eaters in the world, and with many of them residing in Tel Aviv, the city has been deemed a haven for vegans.

Growing demand for plant-based foods and cruelty-free encounters with animals means that more and more travel companies are starting to cater for this group.

“Personally, I don't allow my vegan values to limit the places where I travel,” says Werneth.. “I've travelled to some pretty remote places, such as Lesotho (in southern Africa) and the Republic of the Congo, where the concept of veganism is completely unknown. Some destinations certainly have more vegan options than others, I've always managed just fine and have never had to go hungry.”

“Some destinations certainly have more vegan options than others, I've always managed just fine and have never had to go hungry.”

Werneth’s vegan travel blog was born out of a three-week trip to Greece, which she took djust after switching to a plant-based diet. Apprehensive at first, she was amazed by the variety of vegan-friendly Greek foods. Now, she hopes to inspire others to not let dietary requirements dictate their travels.

“Vegetables, grains, legumes, nuts, fruits and seeds are major components of almost all cuisines around the world. Vegan food is everywhere,” she tells Euronews Travel.

What can vegans do to make travel easier?

“The key is to do some research beforehand so you know which dishes and ingredients to look for at your destination,” says Werneth. “And it also helps to know how to communicate your needs as a vegan in the local language.”

Where are the best places to travel if you're vegan?

Italy is more vegan-friendly than you think

“One of my all-time favorite destinations for vegan travel is Italy,” says Werneth.” People are often surprised when I say that, because they are used to eating in their local Italian restaurant, where all the dishes are filled with animal products.“

“Local dishes vary a lot from region to region, but the south of Italy is especially vegan-friendly. In my opinion, the best Italian regions for vegan food are Puglia and Sicily.”

“Another destination that was a huge surprise for me in terms of vegan food was Mongolia! In a country where up to 40 per cent of people live as nomadic herders, mutton is the mainstay of the local cuisine,” explains Werneth.

“Most of the land is suitable only for grazing animals, not for growing crops. However, even in Mongolia, there is a thriving vegan movement, centred mainly around the capital, Ulaanbaatar.”

“Before my trip, I made contact with Ulziibileg Dugar (my local guide), who was just starting up the very first vegan travel company in Mongolia.”

“My husband and I became her first clients, and she cooked delicious vegan versions of Mongolian dishes for us throughout our whole 16-day tour of the country. It's pretty rare for foreign tourists to have anything positive to say about their culinary experience in Mongolia, but we ate scrumptious meals the whole time.”

Travel companies should do more to cater for vegans

“Doing more to accommodate vegan travellers would certainly be a smart business move for travel companies, in addition to having a positive impact on people, animals and the planet,” says Werneth.

“Travel companies would do well to liaise with their partners on the ground to ensure that they understand the needs of vegan guests and can create interesting and nutritious plant-based meals. A bowl of spaghetti with tomato sauce for dinner every night just isn't going to cut it.”

“A bowl of spaghetti with tomato sauce for dinner every night just isn't going to cut it.”

Can engaging with animals be vegan-friendly?

Vegan or not, travellers nowadays are making more conscious decisions about the way they interact with animals during their trip.

Organisations such as PETA are campaigning for tourist attractions to ensure that animals are treated humanely. But even so, Werneth warns us to be wary.

“Unfortunately, even some organisations that call themselves "sanctuaries" are actually exploiting animals for profit, so it's important to do your research before visiting.”

She adds that “a true sanctuary will provide a haven for rescued animals to live out the rest of their lives in peace. If the animals are forced to interact with visitors in any way, that's a big red flag.”

Have you got any travel tips for vegans? We’d love to know - tag us on Twitter @euronewstravel.