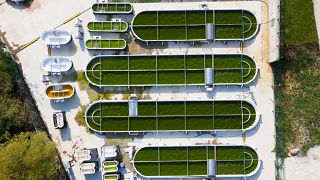 The first carbon-negative biorefinery in Europe opened in Istanbul and is utilising algae to make a variety of products for multiple sectors in Turkey.

A biorefinery turns organic material into energy and useful products.

Turkey is hoping to use both microalgae and macroalgae to produce a variety of products including fuel, food supplements and fertilisers at its new biorefinery

The facility is part of a project that strives to use "bioeconomy" to drive development, according to Berat Zeki Haznedaroglu, an assistant professor at Bogazici University.

The refinery is part of Turkey's 'Integrated Biorefinery Concept for Bioeconomy Driven Development', or INDEPENDENT project which aims to provide fuel for the energy sector as an alternative to dependency on fossil-based and non-renewable resources among others.

The facility is located inside the campus of Bogazici University adjacent to the Black Sea where all the algae production takes place.

The 2,500-square metre facility will be able to process approximately 1,200 tons of wet algae mass per year.

In order to process sustainable natural resources based entirely on algae without depending on fossil resources, an integrated carbon-negative biorefinery system with a zero-waste target has been designed.

It is the first such facility of its kind both in Europe and Turkey.

It aims to provide fuel for the energy sector as an alternative to dependency on fossil-based and non-renewable resources.

The biorefinery is currently at the prototyping scale of producing bio-jet fuel which can be blended at 1 to 10 per cent with standard jet fuel.

At the end of 2022, they hope to carry out a domestic flight with Turkish Airlines and to reduce carbon dioxide and other greenhouse gas emissions.