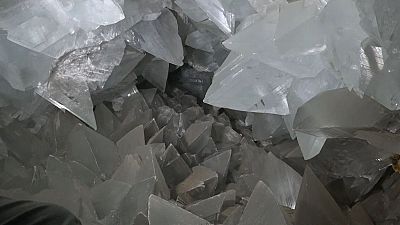 One of the biggest natural geodes on earth is set to open to the public for the first time.

An underground cave, full of giant crystals and minerals sits deep below the Andalucían town of Pulpi. Accessed via the shafts of a silver, iron and lead mine that was decommissioned in the 1960s, engineers are hard at work to ensure guests can safely access the geode.

More than 600 tonnes of rock, rubble and earth have been removed to allow access to the natural treasure.

Visitors will first have to first walk down the long, dusty mineshaft before descending metal staircases which will take them through the vast caverns of the mine, before arriving at the entrance to the cave - an opening in the rock ringed by massive, white crystals.

Some of those crystal shards are up to a metre in length. Inside, the geode measures eight metres long and two metres high but every inch is lined with crystals, no two of which are the same. Some are smooth and rounded while others are jagged, jutting out into the centre of the cave.

To protect the crystals, the public won't be able to go right into the geode, but they will be able to poke their heads inside the opening.

"It's special for two reasons: the size of the selenite crystals inside the geode - there are some which measure more than one metre, which feels like something out of a Jules Verne film rather than reality,” said geologist Francisco Fernandez Amo.

“Also the purity of the crystals you can clearly see their transparency, almost entirely calcium sulfate and no impurities which gives them incredible transparency.”

The cave is set to open officially in October, with limited previews from next month.

Hit play on the video above for more.