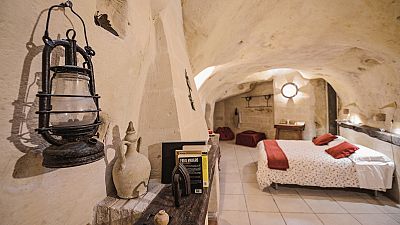 Imagine waking up inside a sea grotto that cuts through a rugged cliff on a semi-desert isle; the seagulls crying, the shimmering blue water calling you for a refreshing good-morning swim. It's just you, a long cave with double entrance at each side of the cliff, and a pristine wild landscape. After breakfast, a private dinghy is at your disposal to move around. It's like being a privileged castaway indulging in a once-in-a lifetime Robinson Crusoe experience, albeit with most - but not all - modern comforts.

The first thing that hits me when I first land on Palmarola, a stunning tropical-like island off Rome's coast, is the eco-conscious lifestyle of the few locals that boast a cave-dwelling here. These white grottos, with blue doors and windows, perfectly blend in with the environment. They're hard to spot, stuck inside the rocky cliffs.

Once former refuge where fishermen would wait out nasty storms, today owners use solar panels, collect rain water in tanks for shower and toilet uses, and have limited down to a minimum electricity, towels and washing products. Forget AC, minibars and internet. Not even mobile phones work. When the sun sets, torches and candles appear along the winding stone steps that connect the caves.

"The great thing here is silence, pure nature and fresh air. We wake up at dawn to admire the sun rise and at dusk we gather on the beach to cook the fish fresh from our nets", says tourist Stella, who regularly rents a grotto in Palmarola each summer.

It's the cave frenzy. On the nearby, main island of Ponza there are panoramic 150 square-meter grotto houses with multiple-layer terraces covered in bright bougainvilleas and overlooking Saracen fortresses. Rain water is collected in ancient Roman cisterns for domestic uses and access is either by foot after a long hike, or by rubber dinghy which becomes your private water taxi. There are no spotlights along the paths leading to the caves' doorsteps. I have to use my phone flashlight as I make my way up steep stone stairs lined with prickly pear shrubs, once used as donkey paths to carry goods.

This "back-to-the past" chic trend spreading in Italy is part of a primitive, Rousseau-style allure that draws people craving for a simple lifestyle or for a short, detox stay inside caves originally inhabited by primitive men in search of the precious black obsidian stone.

I'm struck by the fact that nowadays, amid all the shiny trappings of modernity, a poor simple way of life that mimics that of modern hermits has become the real luxury.

A revival of ancient lifestyles

Across the boot there's a revival of ancient lifestyles and accommodations: abandoned wooden sea huts, cone-shaped nomad tents, Alpine mountain dairy lodges, middle age farms and other historical dwellings are being recovered to modern use but with an elegant green approach.

In Matera, the layers of this breathtaking funnel-shaped UNESCO listed city are entirely made of stone caves where up to the 1960's poor peasant families lived together with their animals. Now they're luxury retreats.

La Dolce Vita B&B features cave rooms dotted with tiny cavities that look like Swiss hole cheese sanctuaries. The owners recycle food leftovers by giving them to an old granny in exchange of her hens' fresh eggs. They serve guests homemade pomegranate fruit juices and other fresh produce from their orchard.

There are led lights only while automatic switches turn off electricity when guests are out. The laundry is done with biological detersives and there are soap refills in each bathroom. But what strikes me the most is the centralized system that keeps the room temperature and ventilation under control, according to the weather and humidity level outside.

"These millennial caves are alive, they breathe. I have maintained the original structure during the restyle and exploited their peculiarity. Grottos naturally adapt to the external climate: when it is hot outside, it's warm inside. And vice-versa. A special software allows me to regulate all this and minimize electric energy consumption and heating", explains owner Vincenzo.

I'm fascinated by the discovery that the walls of Matera's grotto dwellings behave just like lungs, and can't help mulling over the wisdom of past generations as I indulge in a plate of homegrown, crispy fried chili peppers called cruschi that surprisingly aren't hot but pleasantly sweet.