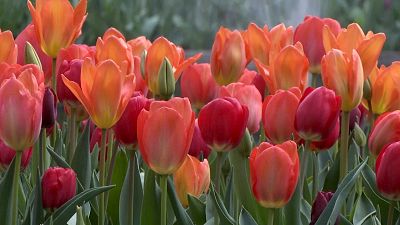 It was due to open on Saturday 17 April, but warm weather has meant the flowers have blossomed earlier than predicted and visitors can already come and see them.

The palace is a Grade I listed royal palace in London, 12 miles west of central London on the River Thames.

Tulips have been grown at the palace since Queen Mary II's reign in the 1690s. Back then, the cost of one tulip bulb was the equivalent of a family car nowadays.

Prices have dropped since then –  it's now just £20,000 for all bulbs in the festival. But they still cultivate some of the same historic varieties kings and queens enjoyed centuries ago.

"Some of the varieties we've got date back to 1660, so that's over 300 years since they've been here in the ground and growing and flowering as we are enjoying them now here today. So, it's a hell of a long time," says Deputy Head Gardener Graham Dillamore.

Watch the video above to see all the different colours of tulips in bloom.