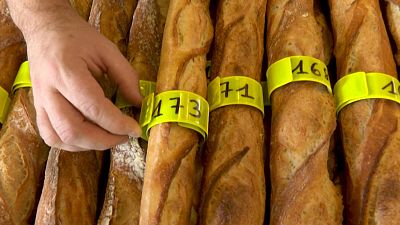 An undocumented immigrant has claimed the award for the best baguette in Paris.

More than a hundred contestants took part in the competition, which is held annually to uncover the city's finest boulanger.

​​The competition, known as the “Grand Prix de la Baguette de Traditional Francaise de la Ville De Paris”, was established in 1997 by then-mayor of Paris Jacques Chirac to celebrate the baguette, a staple of the national cuisine and a cherished symbol of France..

"You have to travel all over the world to understand that good bread like ours doesn't exist. It's not just chauvinism, it's real!" said Olivia Polski, deputy mayor of Paris.

As well as prize money, the winning baker is also granted the right to supply bread to the presidential palace for a year.

The lucky winner in 2021 is Makram Akrout, a baker of Tunisian origin, who has been living in France for 19 years after first arriving as an undocumented immigrant.

"I'm proud, but it is no accident," says the craftsman, referring to the fact that his father was also a baker.

Akrout, who owns the bakery ‘Les Boulangers de Reuilly’ in east Paris, shook with emotion after learning he had won the coveted prize.

The judging panel is made up of experts, retired bakers, bloggers, journalists and a few lucky members of the general public.

On the morning of the competition, hundreds of bakers line up to enter two of their best traditional baguettes into the competition. To be considered, a baguette must measure between 55 and 70 cm, weigh 250 to 300 grams and contain 18 grams of salt per kilogram of flour.

During the day, each juror samples 50 baguettes and scores them based on a number of criteria, such as taste, crumb colour, smell and texture. The scores are then combined to produce the finalists for the day, from which the winner is ultimately chosen.

“I have to be up to the task,” he smiles, “with all the people who are going to come here to taste the best baguette in Paris!”