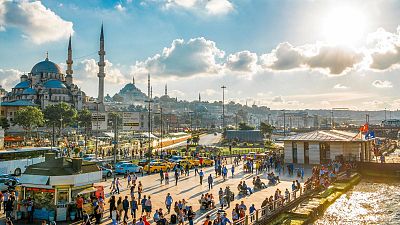 With cultural influences from Europe on its west side, and Middle East and Asian cultures on its east, Turkey is "a mosaic of different cultures and different tastes", according to Mehmet Ersoy, Turkish Minister of Culture and Tourism.

As the country gears up to celebrate the centennial of the Republic of Turkey in 2023, there are a host of new attractions to suit different tastes, from diving and archaeological experiences, to new cycles routes.

Where can I go diving in Turkey?

Turkey recently unveiled its new underwater shipwreck museum where divers can explore the shipwrecks of the historic battle of Gallipoli.

The Gallipoli Historical Underwater Park situated deep in the Dardanelles Strait, features the remains of 14 battleships that were sunk in 1915–16 during World War I, previously you could only dive here with a special permit.

One of the most famous wrecks here is of the British Royal Navy's 'HMS Majestic' which was sunk by a torpedo. The underwater site also features trenches, castles and towers related to the battle.

What archaeological sites can I visit in Turkey?

Turkey is home to many ancient sites and the latest project is Taş Tepeler which stretches across a 200-kilometre area of southeast Turkey.

Between now and 2024, excavations will be carried out in a total of 12 locations in the area, and already over 250 T-shaped megalith blocks have been found in ancient hills in Karahan Tepe. These blocks are similar to those found in the UNESCO World Heritage Site, Göbekli Tepe.

Archaeologists believe these finds will make enormous contributions to our understanding of prehistoric civilisation.

The hills are believed to be an example of the period, 12,000 years ago, when rudimentary shelters began to turn into dwellings and real villages. Basic trade is thought to have been carried out among the megalithic structures.

The Troy Museum is situated on the archaeological site of the ancient city of Troy.

Construction began in 2013 and the cube-like museum was built to mimic an excavated artefact.

The displays are split over four floors and guide visitors through the seven stages of Troy's history, including the Trojan War and the Ottoman Period.

A post shared by Troya Müzesi / Museum Of Troy (@troyamuzesi)

What arts venues are there in Istanbul?

Breathing new life into the city’s arts scene, the Atatürk Cultural Center (AKM) in Istanbul's Taksim Square was inaugurated on 29 October 2021 on the 98th anniversary of Republic Day.

The project has taken 13 years to complete after the 1960s venue, which was named after the republic's secular founder, Mustafa Kemal Atatürk, was closed in 2008 for renovations.

Where can I go outside of Istanbul?

Turkey is famous for many different things, but especially as a winter sun destination.

If you are looking for a late-season beach holiday then try the Aegean Coast, Marmaris, Bodrum, Antalya and the Turkish Riviera.

"We have more than 8,000 kilometres of beaches and the season is very long," says Ersoy.

"It's 28 degrees Celsius in Antalya and the water is 25- 26 degrees Celsius at the moment. So you can swim. You can sleep on the beach. There are a lot of alternatives".

Where can I go cycling in Turkey?

For the sporty, there are also some fantastic cycling routes around the country.

See the famous fairy chimneys via the Nevşehir route in Cappadocia, explore Büyükada island’s beautiful Ottoman-style houses by bike, or take a dip in the beautiful beaches along the 95km Kapıdağ Peninsula.

"Cycling is very popular and there are many new routes," says Ersoy.

For those who want to take to the seas, "cruises have started again in Turkey and Blue cruises (which follow the Turkish Riviera between Bodrum and Antalya) are very popular especially after the pandemic".

"We also have a lot of good restaurants opening in the big cities, especially in Istanbul".

What are the travel restrictions in Turkey?

"And in the tourism sector, 98 per cent of Hotel employees are vaccinated" he added.

There's good news if you’re travelling to Turkey from the EU or the US too.

"For travellers who are not double vaccinated a negative PCR test or antigen test is enough to visit if you are older than 12.