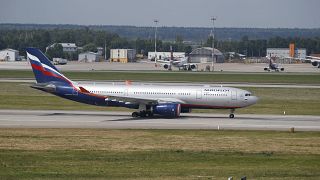 Russia has closed its airspace to companies linked or registered in several EU countries.

Commercial and transit flights from airlines in Latvia, Lithuania, Estonia and Slovenia are now banned from entering Russian airspace.

The move comes in retaliation for similar measures taken by these countries earlier this week, in a move to sanction Russia for its invasion of Ukraine.

On Saturday Russia closed its airspace for planes linked to Bulgaria, Poland and the Czech Republic - again after a similar decision taken by these countries against Russian companies.

Earlier this week Russia's civil aviation authority, Rosaviatsia, also banned UK flights to and over Russia in retaliation for the British ban on Aeroflot.

Rosaviatsia says that Russian airlines will continue to fly to the enclave of Kaliningrad. However, these flights will pass over international waters in the Baltic Sea - thereby bypassing Lithuania.

Germany also wants to close its airspace to Russian planes following the invasion of Ukraine, a spokesman for the German transport ministry told AFP on Saturday.

Late on Saturday, Austrian Airlines, the flag carrier of Austria, announced that it was cancelling its flights to Russia and avoiding Russian airspace for at least the next seven days.

Austrian Airlines took this decision "due to the evolution of the regulatory situation", explained the company in a press release.