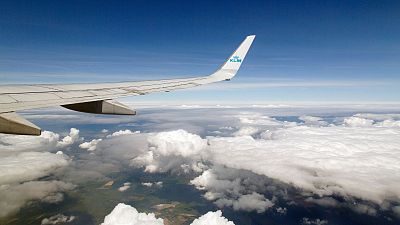 Russia's invasion of Ukraine is having a huge impact on air travel.

While Ukraine, Moldova, and part of Belarus's airspace have closed to commerical flights for safety reasons, some airlines have also taken stands against flying to and through Russia.

This can be in addition to national decisions on airspace which we are keeping updated here. Dutch airline KLM, for example, stopped all flights to Russia on 26 February, a day before the Netherlands shut its airspace to Russian aircraft.

So far all 27 EU member states plus Switzerland, Albania, Canada, Iceland, Norway and the UK have banned Russian aircraft from entering their territory and in response Russia's Federal Agency has banned all flights from these countries from entering its airspace.

Holiday booking sites have responded to the Russian invasion of Ukraine too. Expedia Group and Bookings Holdings - the two largest travel sellers in the US - announced in a statement on 8 March that they have stopped selling bookings to and from Russia.

"We are deeply concerned about the devastating events unfolding in Ukraine and stand with all those who are suffering," said Booking Holidays, which has removed flights to Russia and Belarus from its website.

"Our top priority is ensuring the safety and security of our employees and their families who are directly impacted. We are also in the process of complying with all applicable global sanctions, including significant restrictions imposed from a number of countries."

Here is the key information from airlines so far:

Below are more detailed responses from individual airlines.

The Latvian airline has cancelled all of its flights to Russia until the end of May. The decision was taken due to "increased risks" and restrictions - as Russia has banned Latvian carriers from its airspace.

"Due to the airspace limitations, a small number of airBaltic routes are adjusted, without a significant increase in the flight time," a spokesperson said.

Austrian Airlines says it has suspended all flights to Ukraine until 26 March. Flights to Kyiv and Odessa had been suspended since Monday 21 February - and this was extended to the western city of Lviv following the airspace closure.

As for travel to neighbouring countries, the airline added, “We continue to monitor the situation closely and are in close contact with national and international authorities. The safety of our passengers and crew members is our top priority at all times.”

British airlines have been banned from landing at Russia's airports and entering the country's airspace in response to the UK banning Aeroflot from landing in Britain.

As a result, British Airways has suspended its flights to Moscow and warned that some services to Asia may have to be rerouted causing longer journey times.

"We apologise for the inconvenience but this is clearly a matter beyond our control," British Airways said in a statement.

"We are notifying customers on cancelled services and are offering a full refund."

All flights from flydubai between Dubai and Krasnodar and Rostov-on-Don in Russia have been suspended until at least 1 April.

A spokesperson from flydubai previously said that the airline's routes to Belarus have been cancelled temporarily, and that it is in touch with all passengers regarding their refund and rebooking options.

The airline added that flydubai "follows all guidance from the relevant authorities and strictly adheres to approved flight paths."

The Leeds based airline has suspended all flights to Poland and is cancelling flights to Krakow from late March until the end of May. In a statement released on 9 March, the airline said all affected passengers would be refunded.

"Due to current circumstances, we have taken the decision to suspend our flights and city breaks programmes to Krakow from 24th March up to and including 26th May.

"Where customers are affected by any programme changes, we will automatically cancel their booking with a full refund. We are planning a phased restart to Krakow from 27th May and we will of course keep customers updated."

The Netherlands’ chief airline has cancelled all flights to Russia.

KLM has also stopped flying over Russian territory en route to other destinations.

"This decision was prompted by sanctions agreed upon by EU states, stipulating that no spare aircraft parts may be sent to Russia, even if they are intended for the airline in question," the airline said. "This means KLM can no longer guarantee that flights to Russia or passing over Russian territory can return safely."

“In consequence of the closure of Ukrainian airspace, all LOT Polish Airlines flights to Ukraine have been cancelled until further notice,” the Polish airline confirmed. “Our planes are not flying over Ukraine, and the transit flights will fly alternative routes.”

Flights to Chisinau were also suspended following the closure of Moldova’s airspace.

In response to whether it was safe to fly in and out of Poland, LOT said that “all remaining flights are performing according to schedule.”

Passengers who are concerned about their flights can contact the airlines’ contact centre via messenger, WhatsApp or phone via this webpage.

The German airline Lufthansa is not using Russian airspace and flights to Russia are suspended .

"Lufthansa Group continues to monitor the situation closely and is in close exchange with national and international authorities," a spokesperson told Euronews Travel.

Flights to Asia Pacific destinations are continuing and the airline is adapting routes in order to avoid Russian airspace where necessary.

Any other flights from the airline do not go through Ukrainian airspace.

All Pegasus Airlines flights to Ukraine and Krasnodar, Russia, were cancelled between 24 and 26 February but flights to Krasnodar have now resumed.

A spokesperson for the budget Turkish airline says that guests can change, cancel or refund their flights for these routes up to and including 14 March via its website, App, or by contacting its call centre.

All Ryanair flights to Ukraine and Russia have been suspended until further notice.

“All affected passengers will receive email notices later this morning and all flights to/from Ukraine have been removed from sale for at least the next 4 weeks until further information becomes available from EU safety agencies,” it added, with an apology to all Ukrainian customers.

No other routes are currently impacted. However, Euronews Travel has asked for further confirmation on this point.

A spokeswoman for SAS simply says that no flights to neighbouring countries are affected at this point.

SWISS has cancelled all flights to Russia until further notice and flights to Ukraine are suspended until 30 April.

Wizz Air has also suspended flights from all destinations in Russia and Ukraine.

The central European airline has also moved all of its Moldova flights to Romania.

Affected passengers can find more information on their website or via the airline’s call centre on 00380 893 202 532.

Russia's ban on British airlines is also impacting flights to other destinations. Virgin Atlantic says that flight paths have been adjusted between the UK, Pakistan and India.

Passengers should expect flight times on these services to be extended by between 15 minutes and an hour.

The airline apologised, saying "on Thursday evening (24 February) we took the decision to start avoiding Russian airspace and our flight paths will continue to be adjusted for some Virgin Atlantic passenger services between the UK, Pakistan and India.

"The safety and security of our customers and people always comes first and we’re monitoring the situation in Ukraine and Russia extremely carefully following the escalation of conflict."