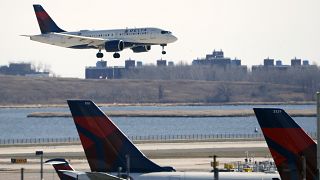 Russia's civil aviation authority has banned UK flights to and over Russia in retaliation for the British ban on Aeroflot.

Russia's Federal Agency for Air Transport (Rosaviatsiya) said that all flights by British carriers to Russia - as well as transit flights - are banned starting today (Friday).

It said the measure was taken in response to the “unfriendly decisions” by the British authorities who banned flights to the UK by the Russian flag carrier Aeroflot as part of sanctions over Russia’s invasion of Ukraine.

Yesterday the British Secretary of State for Transport, Grant Shapps, said he had issued a ban on all Russian airlines.

"I've signed restrictions prohibiting all scheduled Russian airlines from entering the UK or touching down on British soil," Shapps announced on Twitter.

"Putin's heinous actions will not be ignored and we will never tolerate those who put people's lives in danger."

How have countries outside of Europe reacted?

Countries in Asia and the Pacific have joined the United States, the EU and others in the West in piling on punitive measures against Russian banks and leading companies.

The nations have also set up export controls aimed at starving Russia’s industries and military of semiconductors and other high-tech products.

“Japan must clearly show its position that we will never tolerate any attempt to change the status quo by force,” Prime Minister Fumio Kishida told reporters Friday while announcing new punitive measures that included freezing the visas and assets of Russian groups, banks and individuals, and the suspension of shipments of semiconductors and other restricted goods to Russian military-linked organizations.

“Russia’s invasion of Ukraine is an extremely grave development that affects the international order, not only for Europe but also for Asia,” Kishida said.

The moves follow Russia’s full-scale invasion of Ukraine. Putin’s forces conducted airstrikes on cities and military bases, and his troops and tanks rolled into the nation from three sides. Ukraine’s government pleaded for help as civilians fled. Scores of Ukrainians, civilians and service members alike, were killed.

“An unthinkable number of innocent lives could be lost because of Russia’s decision,” New Zealand Prime Minister Jacinda Ardern said. She announced targeted travel bans against Russian officials and other measures.