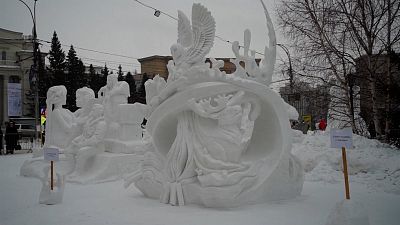 As Europeans, when we think of extreme cold, Russia often springs to mind. And when there’s that much snow available in Siberia, why not hold a snow sculpture competition?

Novosibirsk, a large city in Siberia, is home to the annual Siberia Snow Sculpture Festival, first held in 2000.

This year’s theme, fittingly, was ‘Siberia’, which was chosen to celebrate the region’s diverse history and cultures. 15 adults and 12 teams of school children took part in the event, travelling from various Russian cities including Moscow, Sochi, Khabarovsk and Gelendzhik.

Each team or individual participant was given the same sized chunk of snow and had just four days to produce their final sculpture - with no rules about the size or form of their creation.

"The competition is good in that once a year you can make a work that’s not for a commission, but whatever you want. You are given a theme, and you can do what you want,” says Stanislav Vishnyakov, a sculptor from Novosibirsk who won first prize for his piece ‘Dance of Shaman’.

As per the festival's traditions, three first prizes were announced, as well as a grand prix, also known as the Mayor's Cup.

In previous years, sculptors and artists came from as far as Bulgaria, Germany, Italy, China, Romania, Finland, France and Japan. However, due to COVID-19, this year there were fewer international participants.

The snow sculptures will be on display in Novosibirsk until the end of January.

Many of the teams chose to interpret the ‘Siberia’ theme by depicting the region’s folklore and spiritualism.

Both the first prize sculpture and the piece that took home the Mayor’s Cup (Spirits of Siberia by Ekaterina Fyodorova and Maria Kudrevskaya) featured Shamanist themes.

Shamanism is a religion characterised by belief in ancestral spirits and gods that communicate with shamans.

While Stanislav Vishnyakov’s piece was of a Shaman himself, according to Ekaterina and Maria, their artwork depicts the Siberian spirits of the fauna awakened by a shaman ritual: a Siberian deer and wolves with a huge owl at the top.

2022 is the Russian year of folk art and the Intangible Cultural Heritage of the Peoples of Russia.

Watch the video above to see more of these incredible snow sculptures.

In photos: This sloppy Christmas tradition returns to New York