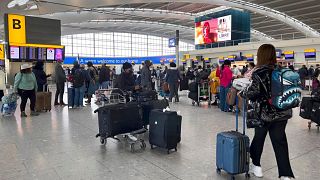 Passengers queue to check in, at Heathrow Airport in London.   -   Copyright  Frank Augstein/Copyright 2021 The Associated Press. All rights reserved
By Euronews Travel  •  Updated: 07/01/2022

PCR tests for travellers arriving in the UK will no longer be required from 7 January, Prime Minister Boris Johnson has confirmed.

For now, the post-arrival test remains in place, but requirements for double vaccinated arrivals have been eased. From 4am, fully vaccinated people returning to the country no longer have to take pre-departure tests and won’t have to self isolate upon arrival.

But from Sunday 9 January, post-arrival testing requirements are also being eased. Arrivals will instead be able to take a lateral flow test rather than a PCR test at the end of day two after they arrive in the UK.

If this test is positive, travellers will then have to take a PCR test to confirm and help identify any new variants. It is the same system that was in place in October last year.

Unvaccinated travellers must take pre-booked PCR tests on both day two and day eight of arriving as well as self-isolating for 10 days.

Boris Johnson told the Houses of Parliament that the previous measures were “having limited impact” on the spread of Omicron.

He added that pre-departure tests “discourage many from travelling for fear of being trapped overseas and incurring significant extra expense.”

Transport Secretary Grant Shapps confirmed on Twitter that as “Omicron is the dominant variant and is widespread in the UK, these measures are no longer proportionate.”

?Testing rules will be relaxed:

He also added that travellers cannot use free NHS lateral flow tests to protect the capacity of the health system.

These changes to restrictions in the UK come after travel firms called for them to be scrapped saying they were making no impact on the spread of the virus. They also said that compulsory testing had been holding back the sector’s recovery from the pandemic.

Trade body Airlines UK said ahead of the announcement that continuing the current travel testing measures would be disastrous for the industry.

Shapps confirmed that a full review of UK travel measures is expected at the end of January to “ensure a stable system is in place for 2022.”