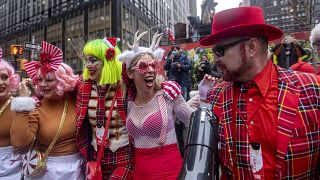 Thousands of booze-filled Santas in all shapes and sizes crowded the streets of New York City at 9 am on Sunday for the return of this raucous Christmas tradition.

Now in its 25th year, SantaCon is an annual pub crawl that takes place in Manhattan to raise money for local charities, but the event is famous for its debauchery and ​​loutishness.

The event, which was cancelled last year due to COVID-19, has been heavily criticised by locals in the past as inebriated participants dressed as Santas, elves, and snowmen descend on the streets of New York City.

Organisers describe SantaCon as: “a ​​charitable, non-political, nonsensical Santa Claus convention that happens once a year to spread absurdist joy”.

Despite the joyful intentions of SantaCon organisers, in the past, the event has received backlash over indecent behaviours by participants, including public urination, public vomiting and reports of sexism.

After a particularly disorderly SantaCon in 2013 which involved multiple incidents and run-ins with the police, organisers have since taken on ‘helper elves’ to keep the crowd in order along a pre-planned bar crawl route which is shared with local authorities before the event.

It isn’t just local residents that have had enough of this Christmas tradition, some local bars and businesses don’t appreciate this particular type of joy-spreading, banning Santas from entering the premises for this one day every year.

This year’s crowded SantaCon was held just one day after New York Governor Kathy Hochul announced that New York State would be imposing stricter mask mandates this week amid concerns over the newest COVID-19 Omicron variant.