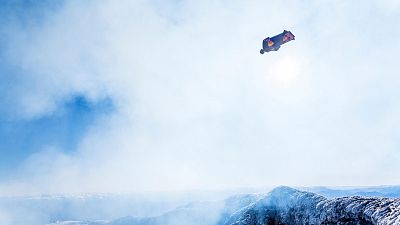 A man has become the first person ever to fly in and out of an active volcano.

Known as one of the best wingsuiters in the world, Sebastián Álvarez spent over a year preparing for this feat.

The former military pilot chose the Villarrica Volcano in the Araucanía Region of Chile as the site of his record, which is an active volcano and one of the most dangerous in the country. It erupted most recently in 2015.

In Mapuche, an Indigenous language of this region, the volcano is called Ruka Pillán which translates to ‘the house of the devil’.

Wingsuiting is an extreme sport which is a variation on base jumping. Jumpers wear a special suit which allows them to glide through the air, rather than just fall - a bit like a flying squirrel.

Though it is an increasingly popular sport, it takes a lot of training to be able to start wingsuiting.

Most people start with skydiving and once mastered move onto base jumping. From there they take up wingsuiting as it massively increases flight time and gives them more freedom to explore new routes.

Preparing to fly into a volcano

Sebastián, 36, chose this particular volcano for two reasons. Firstly, it has a crater that is over 200m in diameter, giving him plenty of space to fly and manoeuvre, and secondly, the incredible surrounding landscape shows off the natural beauty of his home country. No one can disagree with that.

However, it wasn’t as simple as just deciding to wingsuit into a volcano, it took months and months of research, practice and calculations.

“This has definitely been the most complicated project that I’ve worked on due to the unpredictable factors,” Sebastián explains.

This has definitely been the most complicated project that I’ve worked on due to the unpredictable factors.

As part of his preparation, Sebastián, who is nicknamed ‘El Ardilla’ (the squirrel) spent a lot of time at the volcano itself, learning about the smoke columns, air pressure and wind speeds.

“Definitely what worried me the most was entering the crater and as a result of the turbulence generated by the smoke, not being able to find clean air to perform the flare in order to fly out,” he adds.

A ‘flare’ is the vital move in Sebastián’s flight. He must build up speed as he flies downwards, which allows him to continue flying fast horizontally to then be able to fly upwards and out of the volcano.

As well as his preparation at home in Chile, Sebastián also completed around 500 jumps across Europe and South America to help him achieve this feat.

And once he felt ready, it was all about waiting for the perfect moment.

When the time came, Sebastián flew at speeds of over 180km/h and descended around 10 metres inside the volcano.

“The feeling of going into the devil’s house has been one of the scariest, most dangerous and weirdest things I’ve experienced. I had to talk with the volcano first because the volcano does what it wants and if I made a mistake, I could’ve stayed there,” says Sebastián.

**Watch the video above to see Sebastián’s flight in action. **