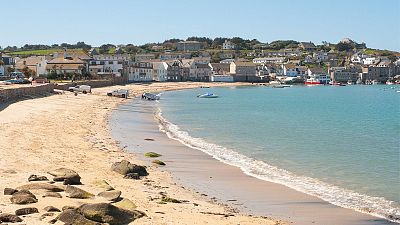 Increasing global temperatures, high-intensity storms and rising sea levels mean the Isles of Scilly are slowly sinking beneath the Atlantic.

According to scientists and the UK Met Office, sea levels will rise by one metre this century because of global warming. The Council Of The Isles Of Scilly warns it could be the worst affected place in Britain.

In the most extreme predictions, experts warn these islands may need to be abandoned as the climate crisis could make them uninhabitable.

Two of the smaller Scilly islands, Tean and Samson, were once inhabited but are now left to wildlife and tourists.

The highest point of the main island of St Mary’s is just 49 metres above sea level, and with the whole island, just three kilometres in diameter, the consequences of coastal erosion are potentially catastrophic.

Hugh Town, the largest town on the Scillies, is just over three metres above sea level and at dangerous risk of increased flooding. There are fears it may be the first to go.

With coastal flooding threatening homes, roads, agriculture and marine life, it’s little wonder that the Council of the Scilly Isles has developed a plan to cope with global warming.

Their Climate Change Action Plan has now been published for public consultation and includes millions of pounds of improvements to sea defences. It also sets out how the Isles will achieve net-zero carbon by 2030.

Where are the Scilly isles?

The Scilly Isles are 140 islands, 28 miles off the coast of Cornwall. Five islands are inhabited with a population of just over 2,000 people.

Due to their position at the end of the North Atlantic Drift, they are bathed by the warm waters of the Gulf Stream and can often feel sub-tropical.

They don't generally experience the hot and cold temperature extremes of the rest of the UK. Instead, with their exquisite blue seas, green landscapes and sparkling white beaches, the Isles of Scilly feel more Mediterranean, although perhaps not as warm as Cornwall.

The islands, however, are often battered by fierce storms that charge across the Atlantic.

With their dramatic coastlines, this is one of the only places in the UK where can you find puffins nesting alongside wild grey seals.

Why should I visit the Scilly Isles?

The Isles of Scilly are a must-visit place for nature lovers and have just been voted the most scenic destination of outstanding natural beauty in the UK.

Sharks and dolphins can be seen while travelling between the islands and snorkelling offers the chance to see the stunning biodiversity of the underwater environment. This incredible flora and fauna that is under threat from climate change is unique within the UK. It's no wonder the Isles of Scilly are working so hard to save it.

With its unusually warm weather, if you want to stay and experience the landscapes first hand then camping is a good option. Stay by the sea and unzip your tent to views of tropical-looking white sand beaches.

The food is another reason to visit Scilly and unsurprisingly seafood is what's on the menu. Everything from lobster to crab and the British classic fish and chips is made with ingredients bought directly from fishermen at the harbour that morning. That also means that menus can change daily depending on what's available so you'll never get bored with the food that is on offer.

How can I get to the Scilly Isles?

You can fly by helicopter or plane, arrive by sea on the Scillonian III, or as part of a cruise.

Penzance Helicopters operate year-round from the purpose-built heliport at Eastern Green in Penzance, direct to either St. Mary's or Tresco Island.

You can travel by fixed-wing aircraft from Exeter (March to October only), Newquay (from May) and Land's End (year-round) arriving on the main island of St. Mary's with Isles of Scilly Travel.

The Scillonian III passenger ferry (March to November) is also operated by Isles of Scilly Travel. It leaves from Penzance once a day - generally departing at 9.15 am and arriving on St. Mary's at 12pm. The ferry then departs again at 4.30 pm arriving back in Penzance at 7.15 pm.

St. Mary's Harbour and Isles of Scilly Airport also welcome independent travellers to the islands so you can come in your own private plane or yacht.

If you want to go island hopping there are hundreds of trips a week on offer. Tripper boats from St. Mary’s are largely run by the St. Mary’s Boatmen’s Association.

When is the best time to visit?

You can visit the Scilly Isles all year round. See Visit Isles of Scilly for more information.