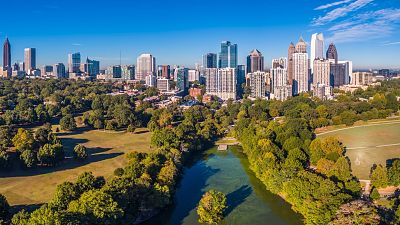 Thousands around the world have been waiting eagerly for the US to reopen its borders. Whether it’s for reunions with friends or families or trips that couldn’t go ahead for the last two years, there’s plenty of pent-up demand.

Luckily, the day has arrived. Today, on 8 November, travellers from previously banned countries such as the UK, much of Europe, China and India will be welcomed back.

City breaks have been one of the many types of travel we’ve all missed during the pandemic. Whether you’re already based in the US or you’ll be flying in, what better way to explore North America than by indulging in a city break?

From Broadway shows and immersive exhibits, to Michelin-starred restaurants and historical sites, you’ll be spoilt for choice.

“Cities will always be critically important as they are the gateways to the diversity of our truly unique USA experiences, and the diversity of our people delivering them everyday,” CEO of Brand USA, Chris Thompson, told Euronews Green. He added, “We know that visitors are eager to return to their favourite cities as well as discovering more of the country beyond.”

But first...COVID is still very much present, so let’s get travel restrictions out the way.

What are the new US travel rules?

Almost all foreign visitors will have to be fully vaccinated to enter the US, with the exception of children under 18. Children must provide a negative test taken within three days of travel.

Under the new rules, some unvaccinated travellers will be allowed to enter the country if they come from countries where less than 10 per cent of residents are jabbed, due to a lack of vaccine availability. A list of 50 of these countries will be announced soon, the American government has said. In this case, visitors would need to have a “compelling reason” to be coming and present a negative test taken within one day of departure.

Airlines will be required to confirm that proof of vaccination comes from an official source and was received at least two weeks prior. So you can expect air stewards to be checking your vaccination status before you can board the plane.

"It is in the interests of the United States to move away from the country-by-country restrictions previously applied during the COVID-19 pandemic and to adopt an air travel policy that relies primarily on vaccination to advance the safe resumption of international air travel to the United States," President Biden said in a statement.

Here’s our lowdown on the 6 best cities to visit in the US.

6. New York: Broadway is back

One word: Broadway. The 41 theatres that line that famous boulevard in midtown Manhattan are back in business.

From The Lion King and Wicked, to Hamilton and The Book of Mormon, these are iconic shows that have been sorely missed during the COVID pandemic.

A year without theatre meant those in the industry had to find alternative sources of income. Some actors became bakers, selling their own sourdough, and out-of-work costume designers started selling their creations on Etsy.

Employment for New York City workers in the arts, entertainment and recreation sectors fell 66 per cent during the pandemic, according to a report by the New York State Comptroller (the state's chief fiscal officer).

So now that Broadway is back, it’s a relief for the arts sector and good news for ticket sales too.

With international travel opening up, the industry is slowly reviving, as 50 per cent of Broadway sales hail from tourists.

The city that never sleeps is launching a $30 million recovery plan to help the tourism sector recover from the COVID-19 pandemic - with the tagline “New York City misses you”.

For more information on what to do in New York, click here.

DC (as the locals call it) has more museums per square mile than anywhere else in the country - and most of them are free to the public.

Renowned institutions like the Smithsonian Museum, the National Museum of American History and the Air and Space Museum make for fascinating visits. The International Spy Museum is also a firm favourite. You can break codes, identify disguised spies and become the subject of covert surveillance throughout your time there.

The National Children’s Museum has just reopened after 18 months of the pandemic, which is a great option if you’re travelling with kids. There’s a ‘Lights, Camera, Ocean exhibit’ with SpongeBob Squarepants, a ‘virtual sliming’ in the sensory-filled slime funhouse and plenty of interactive exhibits exploring science, technology, engineering, art, and maths.

DC is a great city to wander around because it’s very walkable and leafy green.

It’s full of people who love to make the most of their surroundings by getting outside to walk and cycle - and Rock Creek Park is a perfect spot for hiking, biking and exploring.

4. Atlanta: The city of immersive experiences

Atlanta is the capital of the state of Georgia and a popular destination for international travellers. Having played an important part in both the Civil War and the 1960s Civil Rights Movement, many come to visit monuments and commemorative sites, such as the Martin Luther King Jr National Historic Site.

In recent years, it has become a major economic and cultural centre and a hub for air traffic, with the busiest airport in the world. Thanks to the airport, your visit to the city can be closely followed by a trip to 235 directly-linked US destinations.

Post-COVID, however, the city is keen to show off its new immersive experiences which are quite unique.

The Georgia aquarium has lots of marine life, including rare albino alligators and California sea lions. But the best bit is the sharks - you can dive or snorkel in the tank with whale sharks. Visitors wanting to dive must have a Scuba qualification, but if you’re not too keen on getting wet you can walk through the aquarium’s acrylic tunnel to see the creatures swimming on all sides.

The other must-see immersive attraction is the Illuminarium safari experience, taking place at the Atlanta BeltLine (a former railway corridor in the city). This visual experience combines techniques used in old films with virtual reality to enhance the imagery. Basically - VR without the glasses.

It transports visitors to an African safari where you see exotic animals in their natural habitats, using real footage filmed on location in South Africa, Botswana, Kenya and Tanzania.

3. Orlando: Where Disney is a way of life

There’s always a good reason to go to Disneyland, but 2021 is more special than ever. The most-visited resort destination in the world is celebrating its 50th birthday this year.

For bookings made before 2nd November 2021, for selected travel dates in 2022, customers will receive Disney Dining Credit worth up to $950 (€820). The credit value is based on a 14-night stay in selected Disney Resort hotels, when adding a Disney ticket at the time of booking.

Aside from Disney, there is another Orlando attraction that will appeal to thrill-seekers. The VelociCoaster is a roller coaster at Universal's Islands of Adventure, which only launched in June of this year. Speeding through the jungle above high terrains, you race past Jurassic predators, twisting and soaring above land and water.

It has been dubbed “America’s scariest rollercoaster”, with one reviewer claiming, “Honestly the ride is so scary I barely noticed the dinosaurs”.

Orlando boasts 450 hotels to suit every budget, so it’s a very accessible city to visit wherever you’re coming from. It’s right in the sunshine state of Florida so the climate is warm all year round too.

2. San Francisco: The place to go for good food

San Fran is well known for its culinary reputation. But recently it has secured six 3 Michelin-starred restaurants, the most in any city in the world.

The French Laundry is one of the most famous - a Napa-based fine dining establishment with a months-long waitlist.

It draws gastronomy lovers from around the world for $350-plus (€300) tasting menus. Atelier Crenn is another, run by Dominique Crenn, the only three-star female chef in America.

Alongside fine dining, there are many delicious restaurants to discover - especially in the Bay Area. Ever since the pandemic, most have introduced outdoor seating to ensure visitors feel safe and can eat in a well-ventilated space.

And with the all-round warm weather in San Francisco, al fresco dining couldn’t be more appealing.

As most of San Francisco’s population is between the ages of 25-44 and it has the lowest percentage of children of any major city, it’s great for an adult getaway to indulge in good food and high quality wine.

Los Angeles is the place to go if you’re keen on bumping into celebrities as it’s home to many A-List actors and musicians from all over the world.

West Hollywood is the best place to spot them, strolling down sunset boulevard with a skinny latté in hand, or dining out at one of the most exclusive restaurants. APL restaurant is one of these hotspots, with the likes of Jake Gyllenhaal and directors like Jon Favreau frequenting it often.

But in case you don’t fancy celeb stalking, you can appreciate film in a more cultural way by visiting the newly opened Academy Museum of Motion Pictures on Wilshire Boulevard. First announced in 2011, the museum has faced pandemic-induced delays since its conception. It officially opened to the public on September 30th this year, granting visitors access to some of Hollywood's most iconic props, costumes and memorabilia.

These include the ruby slippers from ‘The Wizard of Oz’, the sled from ‘Citizen Kane’ and the droids from ‘Star Wars.’

Then there are studios to visit like Paramount Pictures, Universal and Warner Brothers near the iconic Hollywood sign, which offer behind-the-scenes tours. And on Hollywood Boulevard the Walk of Fame honours thousands of luminaries, while vendors sell maps to stars’ homes.

LA is a vibrant, welcoming city to visit - with a multicultural population who speak 220 different languages.

And with LAX airport undergoing a $14 billion (€12 billion) modern makeover, more and more visitors are expected to flock to the city of angels in the next few years.