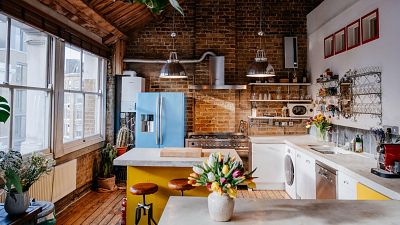 Some business ideas are developed after experiencing bad service, but for Doron Meyassed, it was a surprisingly brilliant stay in Tel Aviv that planted the seed for Plum Guide: the luxury homestay platform giving Airbnb a run for its money.

It was the little touches that got him thinking; the incredible coffee table book collection, the cocooned shape of the living room, fresh fruit appearing in the fridge every day.

As an avid holiday planner (the sort that uses spreadsheets) and a “hardcore” homestay site user, Meyassed was frustrated that he’d landed on the dream place by chance rather than hard certainty.

What Plum Guide’s founder discovered is that “there were many, many hoteliers and a light wasn’t being shone on their artistry.” In 2016, the search began to uproot the best stays from the “depth of mass market platforms.” Only 3 per cent of homes in each destination make the cut.

First they must pass the ‘Plum Test’ from a ‘home critic’ who assesses the holiday homes on over 150 criteria - everything from WiFi speed and decibel levels in the bedroom, to more subjective qualities such as the feel of the space.

The result is ‘the science behind the perfect stay’, and it's a winning formula according to Plum’s growing success. With sales at 90 per cent of pre-pandemic levels in August 2021, the company claims it is outpacing the international travel recovery, which regained only 26 per cent of sales.

Why has luxury travel rebounded faster?

The number of Google searches with the word ‘luxury’ in them overtook ‘cheap’ for the first time around summer 2009, and they’ve been growing apart ever since, Meyassed points out. The pandemic appears to have accelerated our desire for quality in travel and other aspects of life.

“I think what’s happening is that now something so precious has been taken away from us - holidays - and we kind of took them for granted,” he says, “people now really want to make sure there’s no hit and miss in their trip; they don’t want to take any risks.”

Cue Plum, where there’s no chance of being scammed or disillusioned by the rigorously vetted homeowners. It aspires to be the Michelin Guide for holiday homes among its audience of urban creatives.

How affordable is a Plum stay?

Who wouldn’t want to stay in a gorgeous ‘treehouse’ in Shoreditch, or within touching distance of the Eiffel Tower? The only catch, of course, is the cost.

It remains one of the biggest communication challenges for the brand, says Meyassed. “The typical person sees this beautiful photography and gets attracted to the incredible homes and gets the feeling ‘this might not be for me’.” But with three pricing tiers a Plum stay might be more affordable than you think.

The cheapest one-bedroom in London is around £100 (€119) a night, rising to £8,000 (€9,500) for a huge town-house in upmarket Chelsea. Meyassed envisages the rungs in terms of occasions, imagining how much people would stretch to for a honeymoon, for example.

Where is Plum going next?

Thanks to a $9 million (€7.7 million) funding injection earlier this month, Plum Guide is on a mission to expand its Michelin-esque reach.

‘The number one feedback we get from customers is ‘you’re not where I’m going’,” says Meyassed. Being so meticulous, it takes time to scale-up their quality operation, which includes 500 destinations across 26 countries.

Plum homes are opening up fast on the East and West Coast of the US, however, as well as in European summer destinations like Ibiza, Majorca, Florence, Puglia and Venice.

While the demand for country cottages means they’re branching out into more rural areas of the UK too.

With industry research showing that travellers are increasingly willing to pay to make their trips more sustainable, do they have an eye for going greener? “I’m embarrassed to say that we dropped that by the wayside when COVID-19 hit,” says Meyassed.

Previously, “we were starting to think about what we test in the home, as well as offering customers the ability to offset their trip.” Having well and truly emerged from “survival mode”, sustainability is now back on the agenda.

You can check out Plum's portfolio of properties here. If you want to be part of the Plum story, the business is currently looking for people to invest in its crowdfunder.

Why does no one want to work at hotels in Europe anymore?