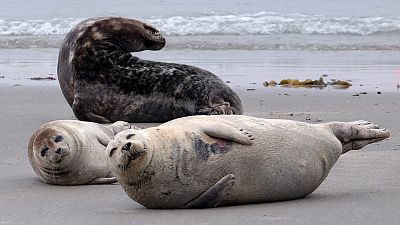 If you’ve ever longed to escape modern life - whether that’s crowds, concrete or COVID-19 - then an island with more seals than humans might be the place for you.

But what if your island home is just a tent without electricity or water? And while it overlooks the island with a lovely sea view, the toilet is 50 metres away, down a steep hill.

Add to this the fact your camping trip is due to last four months, and you might not be so eager to sign up.

Just a mile off the Cornish coast, Looe Island is popular with sunbathing seals.

In April, Cornwall Wildlife Trust put out an advert for volunteers to camp on Looe Island for four months. Those chosen as ‘castaway conservationists’ would monitor wildlife and guide visitors, while also tending sheep, chickens and vegetable gardens.

After a year of staying mostly indoors due to COVID-19, Lauren and Toby loved the idea of living in the wild.

Away from the busy traffic and noise pollution of the mainland, they were relieved to discover Looe Island’s tidal rhythms and natural soundscapes.

“Sunsets were blissful as the sun dipped behind the horizon above Port Nadler beach,” says Lauren.

“Sometimes we were joined by the island’s sheep who would lie down around us, while hundreds of herring gulls and greater black-backed gulls flew to rest on the island overnight.”

Watching wildlife on the island

The volunteers were charmed by the variety of wildlife they were tending, counting and identifying – from brimstone moths and oystercatchers, to grey seals.

Working outdoors in the fresh sea breeze, hearing waves breaking and gulls calling, Lauren and Toby enjoyed the satisfaction of helping to protect their environment.

During breaks they were rewarded with rarely seen views of Cornwall’s green and gold coastline.

Toby explains, “Luckily our tent was positioned right at the top of the island, where we could see beautiful views of Rame Head, and it was perfect for watching seals resting on the Ranneys rocks,”says Tom.

“We will never forget seeing them basking in the sun and hearing them howling away – especially in the early mornings, as a unique alarm clock!”

“We loved watching playful, young and inquisitive seals darting among the rocks together through the seaweed,”

“We loved watching playful, young and inquisitive seals darting among the rocks together through the seaweed,” adds Lauren.

“Meanwhile the older, more chilled seals that have seen it all just ‘bottle’ in the water, peacefully sleeping, snout to the sky, while the world goes by.”

How did the pair cope with camping for so long, on such a remote island?

“Preparing and organising food was challenging at the start, with no fridge or freezer,” says Toby. But the resourceful couple soon adapted to cooking on a camping stove with two hobs.

Lauren explains, “We regularly had omelettes (using island eggs and veggies), plus chickpea and lentil curries. Our cooking facilities were actually inside the tent. Very convenient if it rained - the tent was well-ventilated.”

Conserving water is important, so they took fewer showers than usual. The water on Looe island isn’t drinkable, so it was brought by boat from the mainland. For their phones and laptop, Lauren and Toby had to charge batteries with a generator.

The couple were allowed occasional days off the island, and attended an arts and crafts fair, to sell their recycled fishing net products

The couple were allowed occasional days off the island, and attended an arts and crafts fair, to sell their recycled fishing net products – such as bracelets – for Behaviour Change Cornwall, which helps to tackle plastic pollution.

Looe Island is home to many vulnerable species, which need peace and protection , so Cornwall Wildlife Trust manages access by providing a boat service during the summer, with guided tours.

But as it’s so near the mainland, Lauren and Toby often had to deter ‘invaders’.

“Part of our role included patrolling round the island for un-permitted visitors, with often challenging confrontations,” says Toby.

Especially during June and July, kayakers, paddle boarders and swimmers would commonly ignore the rules and land on the island.

“A lot of the time, people would not understand why there is a no landing policy on the island, and that was quite frustrating. This was especially an issue when seabirds were nesting, with un-permitted landers causing all the birds to panic, and young birds to flee to the water where they are very vulnerable,” continues Toby.

“On busy, nice weather days, when one person landed, it would attract all other water users around to land, escalating the disturbance. Most people reacted fine and understood the reason for us coming over, but others got extremely defensive and rude.”

Returning to the mainland

After months of manual work on the island, Lauren and Toby glow with good health. Perhaps helped by daily hikes up and down the steep hill to visit their distant toilet, Lauren says they developed “calves of steel”.

Toby explains, “There was always something to do. When not helping with public trips, we were carrying out physically demanding tasks such as clearing vegetation, helping with contractor deliveries, and footpath maintenance. We even got to construct our own bench, a nice little marker of our time on the island.”

Just before leaving, as well as carrying new solar panels onto the island, they also helped build the sheep shed to support them. Another legacy to benefit future volunteers.

Both castaway conservationists appreciate the psychological benefits of their island adventure.

Both castaway conservationists appreciate the psychological benefits of their island adventure.

“Spending most of our previous year in lockdown, doing university work at home with stressful deadlines, being able to live on the island free of these stresses, surrounded by the sound of the ocean, birds and insects has done wonders for us,” says Lauren.

Restricted by COVID-19 , British vacationers have mostly stayed within the UK, so ever-popular Cornwall is even busier.

It might take Lauren and Toby some time to get used to such crowds again. Although the couple have only just left the island after four months in tranquil seclusion, they still feel called to the wild.

Lauren says, “We’re enjoying a camping trip to Dorset for a few days now, a quick getaway before working – we obviously love our camping too much.”