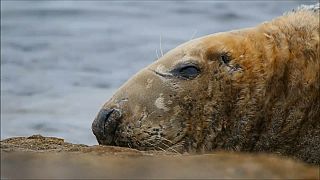 Building a country-wide picture of Grey seals around Britain's coastline - that's the aim of the Seal Spotter Smartphone app.

The charity The Seal Project, together with researches at Plymouth University, are asking citizen scientists across the UK to help track the mammals.

Conservationist will be able to find out if seals are alone or in groups if they've been entangled in plastics or showing signs of injury and whether they're feeding, resting or fighting.

Zuzanna Helska is a resident in Brixham, Devon and an app user said, "It's very important research. These are transient mammals, so knowing where they hang out and where they go from here is very, very interesting, and helps us understand their life."

In the early 20th century Grey seal numbers dropped to just 500 according to The Wildlife Trusts.

"It will enable us to learn so much more about them as a species and protect them better," said Sarah Greenslade, co-founder of The Seal Project. "Obviously, all the identifications, we can see how far they can travel, and different locations are matching up rescued seals all over the place. So, we can learn an awful lot."