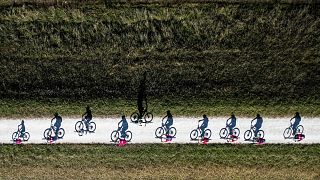 The Drone Photo Awards 2021 has just announced its winners a- nd we’ve taken a look to find highlights of the photography that transports you to another place at a moment’s notice.

Metaphorical Statement About City and Winter

This stunning shot from Sergei Poletaev captures a 500-year-old monastery in the Moscow region with a power plant looming over it.

The tongue-in-cheek title brings attention to its symbolism and gives the picture an added layer of Russian charm.

This picture classified 1st in the ‘Urban’ Category

This shot of a football field in the fishingtown of Henningsvær in the northern archipelago of Norway contrasts the verdant artificial grass with the glacial cool of the winter landscape.

Photographer Nando Harmsen questions the viewer, “would you dare to play here?”

This picture classified highly commended in the ‘Urban’ Category

Another beautiful urban picture of Russia, Sergey Farenyuk’s shot of the ferris wheel in Moscow’s Izmailovsky Park tells an immediate story as the amusement park ride stays static through the deep chill of Russia’s winter.

One of the largest parks in Moscow, Izmailovsky Park stretches out into a forest at the city’s edge and contains other fun activities including shuffle boarding and a 5D cinema.

This picture classified commended in the ‘Urban’ Category

John Cowpland captures the moment a cyclist is caught going against the tide at the annual Big Easy cycling event in Hawkes Bay, New Zealand.

The Big Easy is hailed by its organisers as “the ultimate antidote to all those serious lycra laden cycling events held across the country.”

This picture classified highly commended in the ‘Sport’ Category

Ming Li captures the moment where two dragon dance teams pray together in a 700-year-old tulou in Nanjing, China.

A tulou is a traditional communal Hakka residence found traditionally in the Fujian region of China. These earthen houses are several storeys high circular buildings that look inwards to a central courtyard. A whole clan would historically live inside one tulou, where the building would function as a village unit.

Taken during the Spring Festival, or the Chinese New Year, the picture is a colourful combination of Chinese customs and heritage.

This picture classified commended in the ‘Sport’ Category

Phu Khanh Bui’s shot details the Vietnamese tradition where women wear ‘Ao Dai’ costumes to release coloured lanterns and flower garlands. This ritual is part of a festival to pray for happiness and good luck for their families.

The festival takes place at the full moon of July in cities like Hanoi and Hoi An, famous for their luscious waterways and lakes.

This picture classified highly commended in the ‘People’ Category

Raf Willems captures a scene of people attending a concert while floating in inner-tubes.

He took the photo during Country in the Cove, a Las Vegas music festival that he attended in 2018.

This picture classified commended in the ‘People’ Category

Escape to these cold European destinations by train

This staple of Mediterranean cuisine could disappear due to drought