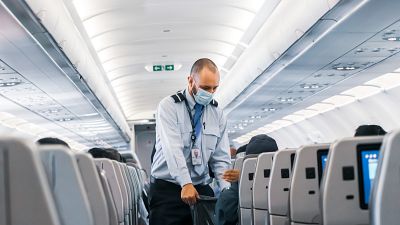 The Biden administration has extended the requirement to wear a mask on all forms of public transport to January 18 2022.

The announcement was made last night and applies to aeroplanes, trains, buses, airports and train stations.

The announcement comes amid an ongoing crisis in the United States regarding the rapid spread of the Delta variant.

The Centre for Disease Control and Prevention (CDC) had previously gone back on its advice that vaccinated people didn’t have to comply with mask requirements.

The US currently has the biggest number of daily infections in the world. It accounts for one in five infections worldwide, with 137,655 new cases reported each day.

Infection rates have increased in every state except Nevada in the last two weeks - but most hotspots are concentrated in the south. Florida currently has the highest rate of infections, hospitalisations and deaths.

Why do US citizens need to wear a mask on public transport?

In some states, public transport is the only place where masks are still mandatory. But this requirement has been a source of some friction with passengers on aeroplanes refusing to wear masks. The Federal Aviation Administration has had 3,889 reports of unruly passenger reports this year, with almost 74 per cent of them attributed to violations of the mask mandate.

The move to extend the mandate was welcomed by the Association of Flight Attendants-CWA, with their President Sara Nelson saying the extension "will help tremendously to keep passengers and aviation workers safe."

Meanwhile, many believe that vaccination is the key to stopping the spread of COVID-19.

“While vaccination has been key to the increased air travel demand, the lagging vaccination rates and rise of the Delta variant has caused cases to skyrocket again - threatening lives, continued virus mutation, and recovery from this pandemic,” adds Sara Nelson.

The US government is yet to make a decision on compulsory vaccinations for airline staff, with Homeland Security Secretary Alejandro Mayorkas telling CNN that - unlike Canada - there was no discussion "at this time" about requiring vaccines for domestic airline passengers.

What are mask rules elsewhere?

In Europe, vaccine passes have been introduced for domestic purposes as well as travel and mask wearing varies from country to country.

However, airlines do require mask-wearing on flights with the European Union Aviation Safety Agency (EASA), who say masks are required throughout the journey except from anyone with a medical exemption and children under-12.

Travel restrictions are always subject to change and can be checked here.

Learning how to kitesurf in Africa's windiest city