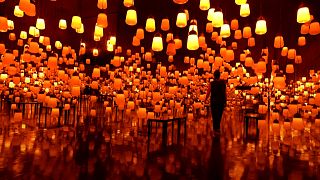 Japanese art collective teamLab have launched a new exhibition ‘A forest where gods live’, which sees a forest in the southwest island of Kyushu brought to life with lights and colourful projections.

The exhibition is in Mifuneyama Rakuen Park, which is surrounded by a forest approximately 80km South West of Fukuoka. During the day, visitors can explore the park as normal. But at night, the park is transformed into another world filled with lights and projections.

Trees and rocks are lit up by lights with ever-changing imagery ranging from blooming flowers, simulated waterfalls and traditional calligraphy.

"In the day time nature may be ignored, but in the night time it becomes artwork. [We] want people to realise the original, some kind of original beauty sometimes we didn’t even notice," explains Takashi Kudo, a member of the teamLab art collective.

Mifuneyama Rakuen Park was created in 1845 at the end of the Edo period and sprawls over an enormous 50 hectares of land. Inside the park there are Buddhist carvings, a shrine, a teahouse and a pond as well as places to stay.

On the edge of the park there are several sacred trees, including the 3,000 year old Okusu tree of Takeo Shrine.

It is this almost seamless transition from a man made park area to a natural forest that inspired teamLab in their exhibition. The focus is on how nature can become art.

"Sometimes people think digital art and nature are completely against each other, but at same time, we think digital and nature are quite easy to merge, because our paint is light so we don’t destroy the nature itself, we don’t paint on original trees or rocks [...] so in the day time it’s going to disappear,” Takashi Kudo adds.

**Watch the video above to explore ‘The forest where gods live’. **