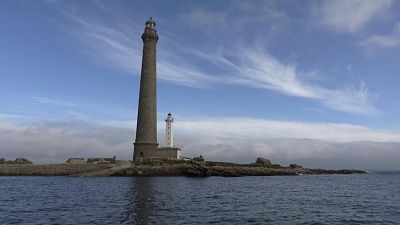 A stay on the rugged, northern French coast has long been associated with cold plunges into the deep blue, charming towns and villages and - most importantly - crêpes. Now, you can make your stay even more characterful by renting a lighthouse right on the seafront.

After losing their keepers in recent years, many of Brittany’s lighthouses are being snapped up by holiday accommodation developers. The converted lighthouses are perfect for sea lovers, couples and anyone who’s looking to watch ocean storms from 30 metres above.

“The storms also attract visitors. The high tides, the storms. For example, this year there was Storm Alex in October and that day, until 9pm, I had people calling me asking: is it free, can we come? We'd love to experience the storm up there, it must be awesome. And yes, it is!"

Do we still need lighthouses?

It’s believed the first lighthouse emerged as early as 200 BC in Ancient Egypt. Since then, they have been widely used to warn mariners of dangerous shallows and perilous rocky coasts, as well as guiding vessels in and out of harbours. The universal messaging is simple: danger, do not approach or come this way.

Now, lots of lighthouses on coastlines around the world are losing their keepers either due to natural disasters (like storms, flooding and eroding coastlines) or because they simply aren’t needed anymore thanks to technological advances.

However, they remain some of the world’s most unusual landmarks, and are often steeped in heritage and community identity. Brittany’s converted lighthouses are pioneering ways in which these unique buildings can be kept alive.

Find out more about Brittany’s bed and breakfast lighthouses by pressing play on the video above.