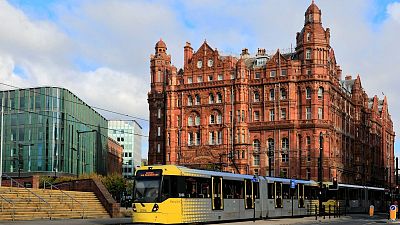 City breaks can be as rejuvenating as a beach holiday if you pick the right destination, but how can you find a new experience?

London, Paris and Rome are all known for being some of the best capital cities for holidaymakers. But if you’re looking for somewhere a little less obvious for a weekend away or a summer vacation, a little inspiration might be needed.

With this in mind, we’ve compiled a list of 12 of Europe’s best cities which are not national capitals. Perfect for a city break in summer or winter, these destinations have all the culture, food and nightlife any tourist could want.

Found in the Greater Poland region of Poland, Poznan is the home of Polish Catholicism with its historical cathedral located on an island in the fork of the River Warta.

This eastern European gem isn’t short of the usual tourist attractions with its colourful market square, alongside the more unusual sites like its edgy museum Brama Poznania ICHOT which is filled with exclusively multi-media installations.

Make sure to sample some of the region’s signature food - wielkopolska cuisine - which is a love letter to the Pole’s beloved root vegetables.

The first city of Germany’s Bavaria, Munich, is the perfect place for people who don’t really like cities that much.

For endorphin junkies, Munich is ideal for urban cycling. The city is close to nearby mountains for hiking enthusiasts and you can even surf in the Isar River - exercise that will come in handy after you’ve been sampling the local baked goods and beers.

The annual Oktoberfest is of course famous, but Munich is also ideal for a quiet getaway; sometimes called Millionendorf (village of a million), the city has a quiet and local atmosphere where everybody knows their neighbours.

Ireland’s second city is central to the green, lush surrounding county of the same name.

Take some time to relax in the tranquil Fitzgerald Park or stargaze at Blackrock Castle observatory, whiskey lovers will enjoy the Jameson experience and culture buffs will love the Cork Opera House and Crawford Art Gallery.

Italy’s fashion and design capital can be found in the northern region of Lombardy.

One of the nightlife capitals of Europe, in part fuelled by its large population of young professionals, Milan has venues for all tastes whether its bijou bars in Brera or LGBT-friendly clubs in Via Lecco.

This port city adorns Poland’s baltic coastline and boasts some of the country’s most beautiful architecture with churches and market squares galore.

Why not grab a traditional meal at one of Gdansks’s ‘milk bars’ and admire the city’s signature brightly coloured buildings as you stroll along the beautiful waterfront.

Dubrovnik’s famous city walls and it’s spot next to the shining Adriatic sea would make you feel like you were in a fairytale - even if it wasn’t one of the locations used to film Game of Thrones.

The city features buildings through the ages and offers some beautiful weather, situated in the South of Croatia. When you’re there, make sure you sample some of the delicious signature fresh seafood.

Spain’s party capital, Barcelona is a cosmopolitan delight with attractions for everyone.. Enjoy some traditional spanish flamenco shows or paella, or more contemporary music in one of Barcelona’s many nightclubs.

Sunset boat tours along the mediterranean coastline are also available for trip with friends or creating romantic memories.

Decorated in murals and home to many beautiful buildings - not to mention the Euronews head office - Lyon is a must visit.

Embedded at the junction of Rhône and Saône rivers Lyon is the birthplace of modern cinema and an important stalwar of french cooking, with both the Lumiere brothers and the ‘Pope’ of French cooking Paul Bocuse originating in the city.

Although a destination in its own right, Lyon is also the perfect base to explore the national parks and vineyards of the Auvergne-Rhône-Alpes region of France.

One of the jewels of eastern Germany, Leipzig has been a culture hub for the arts since the Middle Ages.

Today, the city boasts the Museum of Fine Arts and Forum of Contemporary History to draw discerning culture-lovers, equally discerning party-goers will want to explore Leipzig's legendary techno scene which rivals that of Berlin.

A must-see is the former garment producing district of Lindenau where dilapidated warehouses have been turned into art spaces.

Looking out onto the North Atlantic ocean, Porto is the home of port wine production. A popular spot for young tourists who go for the vibrant nightlife, Porto is also famed for UNESCO listed medieval Ribeira district.

Must-do things in Porto include a sightseeing cruise down the Douro River, the perfect way to soak up a beautiful Portugese sunset, and of course sampling the signature Pasteis de Natas.

A post shared by The Best of Glasgow (@instaglasgow)

This port city on the river Clyde might be in the frozen north of the United Kingdom but a bit of Scottish hospitality will warm you up.

Clydeside distillery will be another one for the whiskey lovers. Fans of the beautiful game will love the Scottish Football Museum and everyone can enjoy the gorgeous artwork on offer along the Glasgow mural trail .

Britain’s undisputed northern capital has culture, nightlife and food to cater to every palette and is truly a city for all seasons (because the weather is equally bad all year round).

Manchester has chased in on its industrial heritage like nowhere else and Victorian warehouses and canals can be spotted all over the city.

Why not visit the Lowry or Royal Exchange if you want to enjoy some of Manchester’s vibrant theatre scene, or visit the Museum of Science and Industry or People’s History Museum to learn about the city’s political and industrial past.