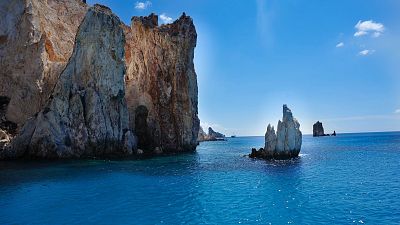 Greece is officially open to tourists. With over 6,000 islands, the Mediterranean paradise attracts flocks of holidaymakers every summer. In 2019, more than 34 million people visited Greece, more than three times the country’s population.

Locals on the nation’s 107 inhabited islands rely on the cash influx from tourism. That was before COVID-19 virtually halted European travel for more than a year. In 2020, tourism dropped by 78 per cent.

At the end of 2020, the Greek government began an ambitious policy of vaccinating everyone on islands with less than 1,000 inhabitants. It is dubbed Eleftheria or ‘liberty’.

Since then, the vaccine rollout has seen COVID-19 all but disappear on many islands. As the country reopens for visitors, we’ve compiled a list of six COVID-free hidden gems to add to your travel list.

Kastellorizo, officially called Megisti, was the first island in Greece to be fully vaccinated. In fact, the entire population of this small island has been vaccinated since the end of January. With more than 90 per cent of locals employed through the tourist industry, this island is sure to be a hotspot for internationals needing an escape in 2021.

Blue and white...the colors of #Greece...Welcome to the #Lipsi island!
??⛵#visitlipsi#pointsofview#dodecanese#visitgreece#AegeanLikeNoOther#GreekSummerFeeling#grecia#greece#vacation#holidays#travel#beach#vacationmode#Griechenland#aegean#beachlife#ttotpic.twitter.com/UqmITpvbnC

Located more than 350km from Athens, Lipsi is the perfect place for travellers who want to get away from it all.

Aside from a beautiful port, the island doesn’t have many towns and villages. The lack of tourist hotspots is compensated for entirely, however, by the island’s beauty. Unspoiled landscapes, entrancing scenery, and secluded swimming spots make Lipsi the ideal escape. As if things could get better, Lipsi hasn’t had a single covid case since the beginning of the pandemic.

For tourists looking for the truly unrefined experience, the Katsadia naturist beach offers just that.

Named after the thyme plants that blossom on its hills, Thymena is the second-largest island in the Fourni archipelago. Sparsely populated, it was one of the islands that benefitted from the government’s move to fully ‘liberate’ islands with less than 1,000 inhabitants from COVID-19..

Thymena isn’t as green as many of its counterparts but boasts a small, beautiful monastery atop one of its hills.

The island is easily accessible by ferry and most visitors prefer to visit for a few hours rather than spending the night.

3. Ios - Worth the hangover

Breathtaking and uplifting view from Ios Island. Have you ever been there? If not it's time to start planning your first visit!#ios#iosisland#greekislands#discovergreece#greece#visitgreece#travel#islandlife#cyclades#bealocal#traditionpic.twitter.com/UNvkNUmPYf

Party-lovers will be thrilled to hear that vaccinations are almost complete on Ios island. Attracting a barrage of international fun-lovers, Ios has gained a reputation as the party destination in Greece.

Located at the heart of the Aegean Sea, Ios is about a seven-hour boat journey from Athens. The ragged cliffs and carefree atmosphere make the journey worth it.

Known for attracting students, Ios is also popular with an older crowd. In the off-season, a holiday in Ios is like any other Greek island - all the charm with none of the hangover.

Good morning a happy day for all of you
Meganisi Greece pic.twitter.com/7b4iXKs3zC

Meganisi is not as popular a tourist destination as other Greek islands. This makes it the perfect spot if you want to experience a Greek island without being overwhelmed by other travellers.

Perhaps the best way to experience Meganisi is via a day trip as it is just a 30-minute ferry from the more popular island of Nydri.

One thing that sets this island apart from the others is its rocky beaches. Meganisi’s stony shores make its waters almost perfectly transparent. With its entire population vaccinated, there is no reason to skip a visit.

Kalamos is the god of the Maeander River in Greek mythology and this island lives up to its divine name.

Less well-known than many other islands, this location is perfect for travellers who want to do something a bit different.

The island is incredibly mountainous making it ideal for hiking trips. Just two settlements here are by the sea, with the largest beaches about 1km from nearby villages. Beaches are rocky, with the ruins of a Venetian castle rendering the island all the more entrancing.