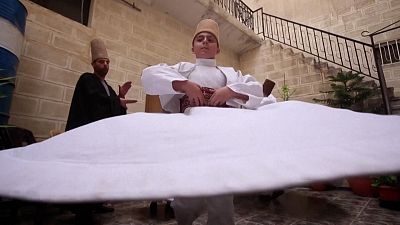 These dancers can twirl dozens of times per minute without moving an inch from their spot.

The al-Kharrat family is one of the most reputed in Damascus for Sufi whirling, boasting 20 dervish dancers who often perform during the Islamic holy month of Ramadan.

What is Sufi whirling?

Sufi whirling is a form of religious dance in which the performer wears traditional dress and spins in circles.

Sufis are practitioners of Sufism, known as tasawwuf in Arabic, which is an approach to practising Islam that emphasises the inward search for God.

The al-Kharrat family began performing Sufi whirling more than 100 years ago. Muayad and Mahmoud started twirling as children, taught first by their grandfather who began the family tradition with his brother.

“Anas learnt to whirl before he learnt to talk,” Muayad says. “He is the youngest dervish dancer in Syria”.

What does Sufi whirling represent?

Popular across the Middle East and Turkey, whirling is a sort of moving meditation through which Sufis seek to commune with the Divine. The performers twirl to the hypnotic rhythm of prayer until they reach a trance-like state.

"By raising our arms we are begging for mercy from God and sending a prayer to the heavens," Mahmoud explains. "Placing our hands against our chest is a sign of submissiveness and humility before God."

The traditional dress worn by the Sufi whirlers includes a long white robe with a matching jacket and a tall felt cap, also called a ‘sikke’. The caps can be brown or black and are designed to emulate the stick shape of the first letter of the word God in Arabic ("Allah").

In war-torn Syria, whirling offers relief from the woes of a conflict that has been exacerbated by a dire economic crisis and the coronavirus pandemic.

“Whenever I feel distressed... I confine myself to my room, and turn and turn until I feel at peace.” explains Muayad.

Before the outbreak of the Syrian conflict in 2011, Muayad’s brother Mahmoud performed in several European countries, and even toured the United States. “We spent more time outside Syria than inside,” he says.

Travel restrictions imposed on Syrians due to the conflict brought the family's performances abroad to a halt, forcing them to keep up the tradition by performing at local events.

“Whirling is for every time and place, but it is even more spiritual during Ramadan.” says Mahmoud.

The holy month is a busy time of year for whirling dervishes, who perform for audiences sipping coffee or smoking shisha in cafes and restaurants after a day of fasting. Almost every popular spot in the capital offers some form of dervish performance to attract customers.

Watch the video above to see the Sufi dancers in action.