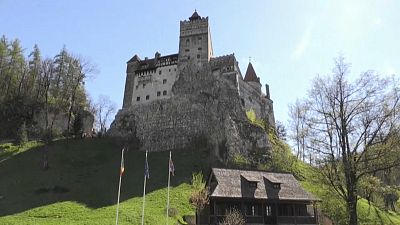 Dracula's mythical mansion has been transformed into a vaccination centre to help speed up Romania's inoculation programme   -   Copyright  AFP
By Euronews  •  Updated: 14/05/2021

In a bid to reach its target of vaccinating 10 million people by September, Romania has transformed one of its most popular tourist attractions into a vaccination centre. Dracula’s castle - otherwise known as Bran Castle - is officially operating as a centre for COVID-19 jabs.

While in normal circumstances it’s probably the last place we would want to be receiving punctures to our skin, people have been queuing up to see the fabled Count Dracula’s castle in Transylvania.

A recent survey revealed that of all the EU’s eastern members, Romanians were least inclined to be vaccinated. Officials came up with the idea of transforming the mythical mansion into a vaccination centre to help speed up Romania's inoculation programme - and it's proving to be something of a shot in the arm for the local tourist industry.

"Our main target audience are Romanian tourists who spend their weekend in the Bran region," explains Alexandru Priscu, marketing director at Bran Castle. "But people from the community are not excluded and the same goes for the castle's employees."

Originally built in the 1200s, Bran Castle has a rich history beyond its more modern associations with Count Dracula. Its location, perched on a rock in a valley high above a river, makes it the only Transylvanian castle to match the description in Bram Stoker’s novel.

Despite the fact Stoker never actually visited Romania, the imaginary drawings of Dracula’s castle included in early publications of the book bear a striking resemblance to Bran Castle.

Local Liviu Necula was intrigued by the offer of a vaccine at the site. "I came with my family to the castle, I saw the banner and I wanted to find out more," he says. "So I mustered the courage and accepted the sting."

Those willing to risk their necks also get a special certificate and an invitation to visit the castle again valid for the next 100 years.

Watch the video for more.